Thank you Santa (and Phil Speight)

So Christmas Day is over for another year and I've spent Boxing Day in the traditional manner, tidying up and putting all our new goodies away. Boat related presents numbered as follows: for Baz, one model narrowboat kit in preparation for when he gets his 00 guage railway set up again (the poor boy's only been waiting ten years); for me, a part share in a book of Cruising Rings and Things (thank you Sophie); for Jim, four videos - a bit of a swiz really as we heve neither a video nor a TV, but they were selling them off cheap at the London Canal Museum (beacuse nobody has a video any more) and we will find some way around it. And also for Jim, these: 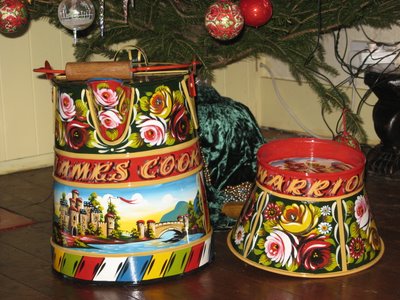 The best present I have ever bought. And a large part of it by accident. Around October time I thought it would be good to get a painted handbowl for Warrior. Then I thought it would be nice to make it a commemorative Christmas present. So I looked at the website of the Waterways Craft Guild and, not wishing to be presumptious, emailed a few painters whom I hadn't heard of. None replied. So, deciding there was no option but to be presumptious, I emailed Phil Speight. He replied straight away, very helpful, with prices. Then one of the others finally got round to replying - and was more expensive! So I placed my order with Phil and congratulated myself on a present well-chosen.
A few weeks ago I got an email to say my can was ready. Oh good, I replied, but don't you mean handbowl? Er, no; he'd done a can. And it was, he said, a particularly nice one, but not to worry, he'd paint the name out and finish it for someone else. I couldn't bear the thought of that, so I rather rashly (without even asking the price of the can) said that if he could still do a bowl by Xmas, I'd take both. And I'm so glad I did, because the handbowl is excellent, and exactly what Warrior needs; but the can is absolutely breathtaking. I've been dying to write about this, but of course I couldn't before because it was a surprise.
Posted by S at 3:47 PM