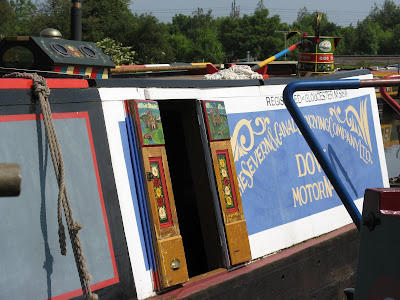 There are two other boats here with Nationals, and I don't think it's my imagination that they are the nicest, most sensible people we've met here. We went to see Dove (the wooden Severner) yesterday morning and spent ages cooing over the engine (1935 DM2), engine room (not too glitzy), boat, historic 1960s conversion ... really nice people. And today we met David and Joanne from Tyrley who came to see our engine while Jim was struggling with the governer. We thought is was just a case of replacing the spring in it with a more suitable one but it turned out that the adjusting screw had been cut off short at some point for some reason. David was sure that he had one in his collection of bits at his home a few miles away and was more than happy for Jim to drive over with him to fetch it. We now have it and will see if it does the trick tomorrow - it looks as if it should. What splendid people these National owners are! I guess (and it really is a guess) that the reason more of them don't come to this rally is that they more likely have working boats and thus better things to do with their time than mixing it with the RN cliques.

Off to the bar now in one final push towards the objective of being sociable, then probably leaving for home tomorrow, owing to a Saga that ensued from my attempts to purchase a rail ticket to get to work on Monday. (In brief: Virgin Rail website, last Saturday (OK, after a couple of pints) select and buy ticket. Elect to pick it up at station - but no FastTicket machine at Nuneaton! OK, will have to have it posted to Barry Hawkins' yard; no problem, as Compo knows the address. But website won't allow you to input address, only postcode - for which it then produces completely the wrong address. All right then, have it sent to Compo and he can bring it when he comes - but it hadn't arrived by the time he left. OK, it's only a £10.50 ticket, but its lack means leaving a whole day early and having to ask someone else to move the boat up into the basin (backwards, as we turned around better to disply the engine to passers by) where we have arranged for it to stay until we go east in August).
Posted by S at 6:04 PM