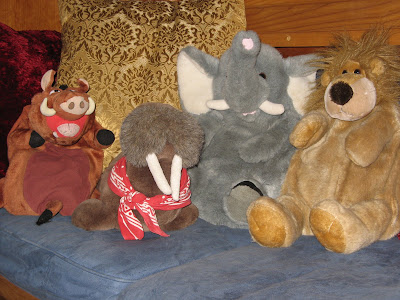 OK, I know this is very, very stupid. Blame Jim, and (to a lesser extent) Baz. And OK, blame me a bit too; I may have played a part in creating the legend of the Tuskers. But I don't actually really believe that they're alive. Unlike some people. This is how it started ...

Many many years ago - I guess it would have been when the film of the Lion King first came out - Sebastian's Auntie Ali bought him a hot water bottle cover in the form of the warthog character. Waterhog, as he was to become known, was an instant hit. So much so that young Baz decided that Jim should have his own hot water bottle the following Christmas. At the local market he spent ages selecting one, and the elephant eventually narrowly won out over the crocodile. This was the same Christmas as I bought Jim the first of many tapes of Round the Horne, very popular with Jim and Baz alike. It thus seemed very natural and appropriate to name the elephant Kenneth. Kenneth the Elephant has quite a good ring to it, no?

Then at a jumble sale I found, on the floor, the sorry specimen that was to become Lionel. Shall I, shan't I, I deliberated... but for 10p, why not. So now we each had a hot water bottle in the form of an exotic animal. Like you do.

Ah. The walrus. What can I say about Wilhelm the Walrus? Only that Jim bought him at a different jumble sale, and he seemed a good sort of boating companion, despite lacking any sort of thermal qualities.

Over the years these artefacts have had characters attributed to them. (Well, we haven't got a telly; we have to amuse ourselves somehow in the long winter evenings). Waterhog is clearly a heavy drinker, jolly company but inclined to vulgarity. Lionel is goodhearted but dim, and rather easily led. Kenneth is a jolly old colonial type who likes a pink gin and twinkles at the ladies. Wilhelm isn't as dour as he looks, but watches over the others with tolerant amusement. We decided (or perhaps discovered?) that they would meet and drink at the Tusker Club (Lionel is an honorary member, on account of not actually having tusks).

In the summer I tell the others that they've gone off on a cruise (but really I've put them away in a box). But in the winter, they like to come boating with us. They like to be tucked up with a big drink of boiling water before we go to the pub. They really are very good travelling companions.
Posted by S at 5:38 PM