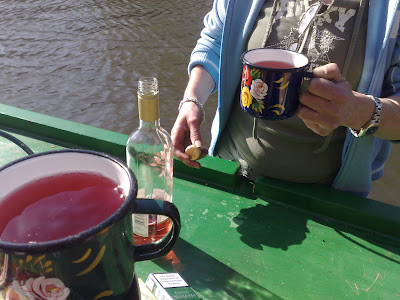 Yesterday Jim and I went to the Little Venice Cavalcade. I'd never been before so wasn't sure what to expect. Had we just gone to wander around, it wouldn't really have taken long. There weren't that many stalls, and although there were lots of boats, most of them weren't really for looking at - although they made a lovely show, all dressed in bunting and filling the pool with colour.

However, we had an absolutely splendid day, thanks once again to our friends on Chiswick. We arrived about noon, via Paddington, and decided to stroll up towards the basin first to see who was there - and lo and behold, practically the first boat I did see was Chiswick, in the process of being decorated in the theme of 'waterway wonders'. 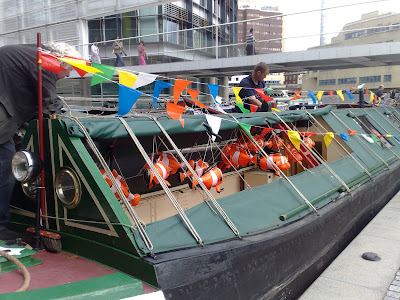 I introduced Jim and we had a cup of tea while James dismantled the plumbing to find a piece of pipe from which to fly the bunting, and we were invited to join them for a trip to Camden and back at about two.

So we went off to see what else was around - one highlight was Dane with its Bolinder running way up at the far end of the Little Venice visitor moorings - and we had some lunch, and returned to find tied up next to Chiswick none other than Victoria. Now as you know, I love a big Woolwich... but a Royalty class... phew. Magnificent. Is all I can say. It's almost too much. So we got to have a chat with Mike, its (relatively) new owner and have a little clamber over it, then we set off in convoy between Victoria and Kestrel (the josher, not the Duckies' friends) to Camden where we all tied up right by the lock and went off for a very quick drink as James had to be back by five for the boat handling competition - preferably with the boat.

Bob and Rosie went off to find a coffee while the rest of us plunged into a Lloyds Bar hell hole, took aged to be served and then had five minutes to down our pints before heading back over the bridge to the boats (there could be a sporting event in this, sort of like orienteering but without the healthy stuff). We were just untying when we realised that we hadn't got Bob and Rosie. Gabriel went off to round them up, then they appeared and we had to call Gabriel back, and then we set off, having slipped out from inside Kestrel whose crew looked unlikely to return for some time.

On the way back I had a lovely view... 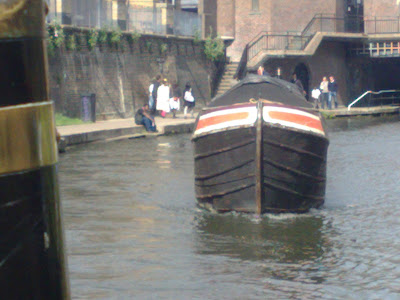 We now fancied another drink, so Penny opened a bottle of rose and sloshed out a couple of generous tin-mugfuls. The flavour was not greatly diminished by the diesel smuts collected along the way. We made it back to the pool in good time and plotted up ready for the competition. I leapt off to meet Dean from work, who I had suggested come down to experience the joy of boats, but everyone else stayed on board while Dean and I had an ice cream - me still clutching my mug of pink liquid - and watched from various vantage points as James completed the fiendish course. 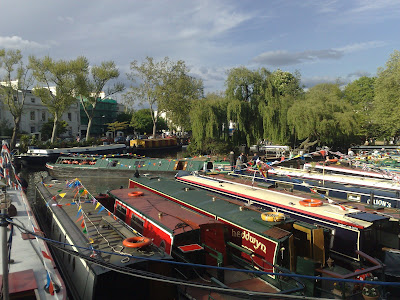 There is a second round today so I don't know yet whether he won, but he has done in the past, so I would have put money on him had the opportunity presented itself, which it didn't.

After that we all went off and had dinner, and while the others prepared for the illuminated parade, Jim and I reluctantly decided to take ourselves home, the last train departing Victoria at the obscenely early hour of 2147. But what a lovely day out we'd had - thanks once again to everyone on Chiswick.
Posted by S at 11:07 AM

Hi Sarah. We let Penny, whe is a lovely lady. I thought I recognised you on Chiswick, but was unsure, so did not wave, just in case you thought i was some mad person waving at you. Glad you enjoyed your time at the Cavalcade. Keith and I had a fantastic weekend and will most definately do it again.