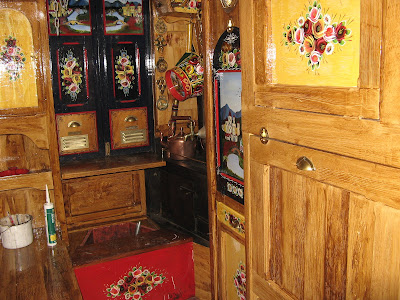 At last, there is news and photos. Many photos, which Jim brought back with him yesterday. He has finished the back cabin, and completed the graining in the bathroom; fixed the gear lever, and looked long and hard at the back boiler. He has used nearly sixty quid's worth of varnish alone - and that's not even at Craftmaster prices. All the dark bits, basically, are new. Everything without roses on has been redone. Some of these areas were previously done in that rather crude yellow graining, but all the framing - it seems so long ago now - had been painted over in a horrible royal blue. The initial plan was just to redo those bits but it sort of growed.

The photos provide just a tantalising glimpse of what has been achieved, and I have insisted that we go up again in a couple of weeks so that I can see it in the flesh. Then of course we will be going for Christmas too. Jim has heard a rumour from Moominpapa that Salters Lode may re-open ahead of schedule around December 18th, so Christmas in Cambridge might just be on the cards again. Or New Year, which would be even better.

Other exciting things to report are that Warrior has a new berth at Bill Fen with a more, in estate agent speak, open aspect (although I never minded looking out at Axe, even if it is somewhat unrecognisable from the side with its pearlescent purple cabin and upvc double glazing), handier for the pumpout and with closer car parking. For anyone that remembers, it's pretty near where our temporary spot was when we first arrived there. With the new mooring have come new neighbours who, from all accounts, are jolly nice.
Posted by S at 11:03 PM

My copy of The Times on Saturday didn't have the promised reproduction wartime poster, so either I misunderstood when it was going to be in, or mine was simply missing. Hope you didn't fork out £1.50 for nothing.

That looks utterly fantastic- well done to Jim! I thought I was jealous before, but...

No, cos I already have one at home, and one for the office. The Guardian though, which I buy anyway (would you ever have guessed?) had the Kitchener poster this Saturday, with a variety of others on the back.

the tube of filler somewhat destroys the traditional back cabin look though!

hope to see you and Warrior at Christmas/New Year