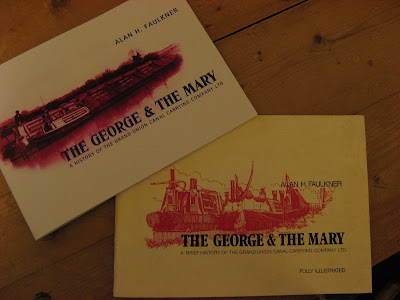 One of the things I was jolly excited about on Saturday was the opportunity to purchase a copy of the brand new edition of The George and the Mary, Alan Faulkner's history of the Grand Union company - obviously a subject dear to my heart. I already had a copy of the 1973 edition, for which I paid a very reasonable £12 - I subsequently heard of them changing hands for a great deal more. But the new edition, we were promised, would have more pages; extra photos, and new information. So I hurried over to the HNBOC shop table and bought their penultimate remaining copy for the even more reasonable price of £4.99 (bet it'll be more than that in the shops).

Now, I have been told by a very reliable authority, that the motor boat in the photo on page 22, unloading at Cotton End, was Chertsey (and that the butty was Staverton). I don't know how you could possibly tell this from the photo - as printed - alone, as no name or number is legible, but the livery certainly doesn't rule it out. No names are given in the caption though.

So obviously the first thing I did was turn to page 22 to see if it was still there, and it was (although I have to say that the quality of the reproduction of the photos in the new edition is vastly inferior to the old one), and this time the caption named the boats - but as Chiswick and Staverton. While I'm quite prepared to believe that the motor boat in the picture is Chiswick and not Chertsey, I have more a problem with the caption in its entirety: 'The motor boat STAVERTON and its butty CHISWICK....'

However, finding this and leaping upon it with such alacrity did put me in mind of this.
Posted by S at 8:38 PM

Bonjour, Sarah - just dropping by to let you know I've enjoyed my visit to your blog. It really IS very informative, too.