Keeping it in all night 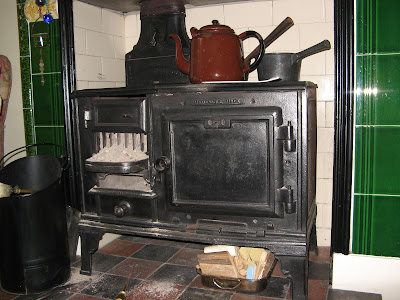 Apparently, this is the sort of stove you could have on a butty. If you had a butty, that is, which would be a tad greedy. It's too big for a motor boat, but those extra few inches in a butty back cabin make it quite feasible, I'm told. If rather warm. I was surprised when I looked in the butty cabin they've got in the London Canal Museum; it had a cast iron edifice in it that was more like a built in range.

Anyway, this one's in my kitchen. It's not a built in one (oooh, how I would love one of those with all their mysterious doors and trivets and things to hang the kettle on; I drool over them in salvage yards), hence its name, the Bell Portable Removable Oven. Presumably it meant you would take it with you from house to house, as an upwardly mobile Edwardian. I don't reckon it would be any great shakes for cooking as the over barely gets hot, but it does make the kitchen nice and cosy.

And I have finally mastered the art of keeping it in all night. On the latest Warrior jaunt I kept the French stove in nearly all week, and got it ticking over really slowly by using the thing at the top as well as the one at the bottom (now, once and for all, which is the damper and which is the drawer?). But the Belle doesn't have a thing at the bottom, the most basic control for regulating the air through the burning fuel. It has a thing in the chimney, which seems to control whether it goes straight up the chimney (fast and hot) or around the oven (slower), but nothing at the bottom, just an open fronted firebox with a little door that keeps the heat in or lets it out. So to get it burning slowly for the night, you have to plan ahead and let the ash build up to block the airflow from underneath. Hopefully I'm getting the hang of it now, as I last lit it on Friday morning and it's still going (though I have cheated and put a bit of wood on each morning before giving it a good riddling, just to be on the safe side). I don't know how you'd cope with one on a boat though; there's always ash everywhere. But I love it.