Flushed with the success of our jumble sale Tilley lamp (a 246B, as it turns out) and with the guidance of a CWF-er, we purchased another one (a Vapalux - don't you just love those names) from an army surplus website. Then we found the nice brass one in the Brewood antique shop, so we now have three. The old new one needs a new set of washers, so we rang up the wonderfully helpful lady at Tilley International, in Guildford, and established that this one is a 246A, and its washers are winging their way to us.

So excited were we by the previously unguessed-at qualities of pressurised paraffin, I started looking into the possibility of finding a Primus stove. What I did find was a world of paraffin websites and even a forum... and many of them were selling - or talking about - the Monitor Wickless Paraffin Stove. So I sent off for one from Parafinalia (because they were the cheapest, plus you have to love the name), and it duly arrived. And this is the wonderful thing - it was manufactured (in Birmingham) and packed, all wrapped in brown paper and corrugated card - in 1956, and untouched since then until I unpacked it and put it together in all its shiny brassy glory. 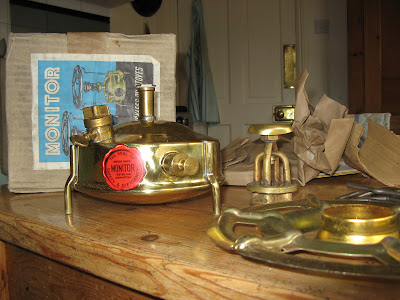 Now those of you who know me will be truly astounded that I am prepared to even stay in the same room as something which is not only full of flammable liquid, but on fire and pressurised to boot, because all my life I have been the most enormous coward about such things. But I now embrace them with the zeal of the convert. Pass the meths....

The first couple of times we tried to light the Monitor ended in failure, and plumes of sooty yellow flames. But this was because we had been too cowardly, and tried to light it outdoors, where the draught blew the meths flame about and stopped the vaporiser preheating properly. Once we took it inside (wet tea towel at the ready, admittedly) it lit perfectly first time, and has done now four times in a row. You can tell when it's lit because it makes the most fantastic jet engine noise (just as well as the flame is nearly invisible and it gets bloody hot), and when you look up underneath it it looks like the burner on a hot air balloon, a jagged jet of flame suspended in mid air. (You can tell I've taken to this in a big way, can't you). 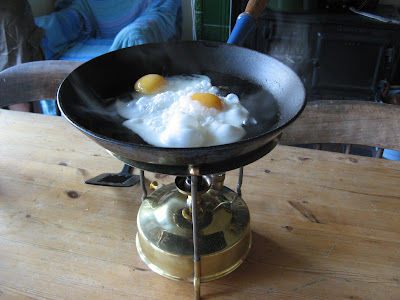 And what's more, it works. I've made tea on the kitchen table with the new enamel kettle, and this morning Baz made fried eggs and fried bread. We even started experimenting with altering the flame, which is done just by adjusting the pressure. Paraffin - its the future!
Posted by S at 6:38 PM

When I was a kid my dad use to make toffee on one of these, mum wouldn't let him near the cooker. He used it for all sorts of things, heating the soldering Irons was a regular occurrence in his shed when he was making something.
It’s still in mum's garage at the moment and a few years ago I bought a "spares Kit" for it. Like you, brand new but about 50 years old.
Have fun, we did.

That is astoundingly nice

Wanna come and play with it?

I was given a wonderful gift of a little Trangia camping stove that cooks with meths. I love it!
- carrie

Because of you, I too have one of these stoves. It arrived today and I've just cooked sausages and fried egg on it in the shed!

Great fun and great noise, too!

Hi,
I have just started to read your excellent blogs.
Please be careful.I had one of these stoves but stopped using it as it tended to flare up if the paraffin did not vaporize and caught fire before reaching the burner.
Take care.
Dave(Brassiclint)Twitter