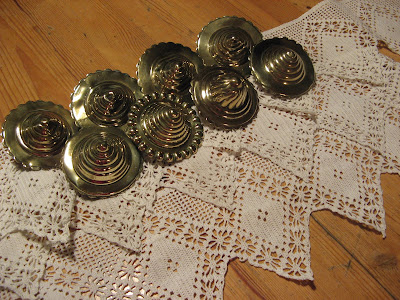 I know it's shallow and girly and I should be out there getting oil under my fingernails, but one of the nice things about having a boat is playing house. As a child, I wanted to live in a gypsy caravan (all to my self, naturally) - but that was only because I'd never seen a narrow boat back cabin. As soon as I first saw one, I was smitten by its cosy efficiency; its defiant clutter, its sheer me-sizedness. So kitting out Chertsey's back cabin will be an adult sized, childish pleasure.

Now, I thought that the easiest thing in the world would be finding some suitable crockery. Odds and ends of mismatched china from the forties or fifties (because on Chertsey it is always 1956, I have decided, unless I later discover something - for example, about when the engine was put in - to make me revise this). I had vast collections of such china, thirties too, lovingly, madly, collected at jumble sales over the past twenty years, which would have been perfect, and only just got rid of it all. So, I thought, there must be loads of it about, waiting to be picked up for pennies.

So we set off to Lewes, to hit the junk shops/antiques emporia, and.... nothing. Just nothing. Older stuff; newer stuff; but nothing from those three decades - at least nothing with dinner plates and/or at a sensible price and very little at a stupid price. Eventually I found a really good set of Doulton 'Frost Pine' which I really rather liked, but Jim thought it was a bit too late. He researched it when we got home and it was in production from 1956 - 64, which does make it a bit late really, and also, with hindsight, it was rather too good and delicate for boating. What I really want is some good old thick institutional white china. I think I will end up buying new.

We also had no luck finding enamel teapots, tea/sugar/biscuit jars, brass handles, &c. We did however get a (new) enamel bucket.

And, unexpectedly, a couple of rather good prizes: a lovely bit of lace (I don't want too much, but a little bit can't hurt) and eight of those brass things for putting on the chimney chain. In the antiques place where we found them they were marked as 'horse brass spacers' - I must confess I had never really given a thought to their intended purpose, and nor had I ever seen any outside of a boating context. Anyway, just as we were leaving, I saw a set of four, very beaten and bashed about, marked at £20. As they were so battered, Jim offered a tenner for them, at which point the shopkeeper produced another four - the much nicer ones - marked at four quid each. So I was happy to take those at that price and we got the other four for £10 into the bargain so I am now very well provisioned with regard to my chimney chain. Given that they were selling for upwards of fifteen quid apiece at Braunston, I was pleased with the day's shopping, even if we still have nothing to eat off; at least there will be plenty to polish.
Posted by S at 8:41 PM