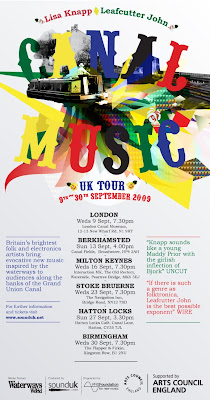 You've probably heard about the Canal Music tour; weird electronic bloke + folky girl making interesting sounds from a stage on board the large Woolwich Chiswick. If not, you can read about it here. Naturally, I'm happy to promote it, because Bob is a really nice person and he let me steer Chiswick, and I hope that the tour is a great success. That's not why I'm writing about it though.

Look at that poster. The tour, which tries to tap into the history and mystery of the canal, travels the route of the Grand Union on a historic Grand Union boat. So what sort of boat do they put on the poster? Yep, your guess is as good as mine, but safe to say it's a pretty unremarkable, nondescript, modern leisure boat. Someone has had the brief to design this poster, and has just reached for 'canal boat' in the picture library. Obviously, I don't expect everyone involved in the music promotion business to be clued up on different types of boats, but hell, they could have asked someone who was. That they didn't can only be explained by either they didn't know there are different sorts of boat, or they didn't care. And yet they could have used a picture of Chiswick itself, had they cared enough.

Rather more amusingly, last weekend I saw one of those big picture hoardings round the Kings Cross redevelopment, a sort of photomontage showing what it will look like when it's finished, lovely new buildings, happy smiling people, and sailing majestically down the Regents Canal... a Canaltime boat. Now, not only must it a. be lost, or b. be on a very long holiday, but, with all respect to the fitness for purpose of the design of these boats, they are hardly the most picturesque on the cut. I'm not even thinking they should have used a historic one, but surely a nice brightly painted boat, perhaps with flowers and cans and stuff, would have added so much more to the scene. Can't help thinking it's just sheer laziness on the part of the designer.
Posted by S at 6:20 PM

I didn't see the Grauniad article, but I heard the report on Today the morning of the start of their tour. I have transcribed it here:
http://jhalfie.blogspot.com/2009/09/canals-on-today-programme-again.html
Nowhere in the report, or the presenters' bits around it, was it stated at which canal museum the interview was taking place. It was only when Lisa Knapp talked about it being on the site of an ice pit that I realised where it was.

I got a lot of photos of the King's Cross redevelopment, and their photoshopped ideas of what it would look like, a few years ago when skiving around London looking at interesting things- no, sorry, that should read chaining myself to a desk at the British Library Manuscripts Room to write my dissertation...

Even more amusing is seeing architects' ideas of what a narrowboat looks like, in adverts in the canal mags for "prestigious new marinas" &c. They generally don't even bother trying to photoshop in pictures of real boats, but design them themselves, and either make Whitefield look positively trad, or suggest that everyone lives in BCN Joey boats with portacabins on top. At least the King's Cross people tried for photorealism!