The best day's boating ever 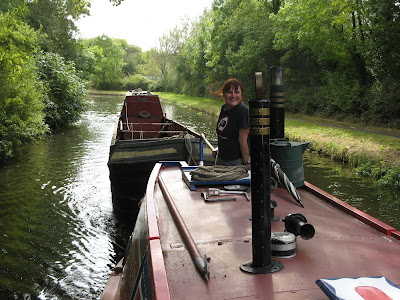 Last Thursday will certainly take some beating. We set our alarm for five, me, Jim and Aaron (No. 1 Son), to be ready to leave at six thirty. The plan was to go with Keith on his large Woolwich Hampstead to Dimmingsdale, and tow Chertsey back to Stretton after loading up with the various engine parts and gear that came as part of the sale. We decided that we could do it in a day, provided there were no hitches.

So, it was about quarter to seven when we set off, and the sun was up as we crossed the aqueduct at Stretton, the stove providing plentiful atmospheric yellow smoke and some welcome warmth. I got my first opportunity to steer Hampstead and what a pleasure it was. By nine fifteen we were at Autherley Junction, and once through the stop lock, turned right onto a part of the Staffs and Worcs where I had never been before, making our way through the outskirts of Wolverhampton. Four locks and a couple more hours later, we arrived at Dimmingsdale (about 11.30) and turned into the arm. The first task was to pull Chertsey out onto the canal, to make it easier to load the various bits, which were nearer the canal bank than Chertsey's temporary mooring. This was done with Hampstead going backwards, tied T-stud to T-stud. Unfortunately I was on the bank and the camera was on the boat, so this was not recorded for posterity.

Then we got the boats pointing the same way and breasted them up just by the bridge while Jim, Aaron, Keith and Tony manfully loaded the spare engines etc onto the pallets we'd brought with us and some hastily arranged shuts. The mast, stands, cross planks, deck board and side pieces were carefully added, and we were ready to set off again, after a quick cup of tea. Back through Wolverhampton Aaron and Jim made bacon rolls while I just kept looking back behind Hampstead and marvelling at what I saw following us; this immense, dignified, graceful but imposing presence, which, when we slowed down, nudged up to us like a friendly dog. Could it really, really, be mine?

As we came to the locks, Aaron came into his own, despite having succumbed to a cold at some point in the previous couple of days. Pretty much a novice - his only previous boating experience had been helping us with Andante for a few days on the Huddersfield - he is a complete natural, and never happier than when he's got something to do. So at each lock we untied the cross straps (we'd not quite got round to splicing them properly, mainly because none of us could quite remember how to splice, but I really really will learn soon) and took Hampstead through, the Aaron pulled Chertsey as far as possible, getting up some momentum, and then got onto the cabin top and pushed the rest of the way in against the bridge. Then once Chertsey was through the cross straps were reattached to the waiting Hampstead and on we went to the next one. I must say the people behind us (I never caught the name of their boat) were wonderful and never expressed the slightest impatience at waiting for us to do this at each lock.

Anyway, it wasn't long before we were back at Autherley, and on the last, lockless, leg, and with me steering, going rather more slowly. I didn't relinquish the tiller, however, until it started to get dark; I was enjoying it so much. We finally crossed the aqueduct (aghast at the behaviour of the drivers on the A5 below) and tied up at half past seven, before retiring to Warrior for several very well deserved bottles of beer. The entire day had gone without a hitch; the weather was perfect; the stove was warm, everyone we met was nice. I steered a big Woolwich, towing another big Woolwich, through numerous bridges far narrower than any I've ever taken a big boat through before, with barely a touch at any of them. Now that might not be your idea of heaven, but it comes pretty damn close to being mine.

The whole story in pictures here.
Posted by S at 8:05 PM

Not sharing.... does that mean you will be doing all the work ;-)

It's mine, but I'm happy to share the work and the pleasure!

Come to think of it, is it really possible to distinguish between 'work' and pleasure in this context?

Reading your last two posts took me back 15 years. I remember us cleaning up the cabin so that we could spend our first night aboard and the same sense of wonder on our collection trip that this thing could possibly be ours, for keeps.
We wish you lots more 'best days'

We had the same rush when we bought wb Pippin!! Isn't it great!

A lounge-bar helmsman then delighted in telling us that the best two days of boat ownership are the day you buy it and the day you sell it.

The day we first take it out under its own power should be a good one too!