In the engine 'ole 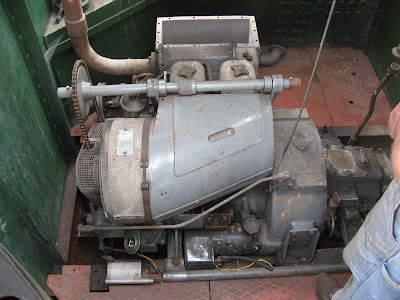 OK, we know the engine's seized. But other than that, it really couldn't look better... Chertsey's engine room is notable for being clean and tidy and dry, and the engine, on the face of it looks likewise.

So here it is, a Petter PD2, as installed by British Waterways in the 1950s to replace the aging (all of 20 years!) Nationals in the former Grand Union boats. I know very little about these engines, but have pieced together that they quite quickly seem to have fallen out of favour, but that for the many of the boat lovers who formed their attachments in the sixties, they represent the quintessential sound of commercial narrow boats. It all looks very streamlined, and fifties-modern.

I have, very very briefly, steered a boat with a PD2 (Lancing), although not for long enough to form any opinion whatsoever of it. I seem to recall that it was loud, so that's good. 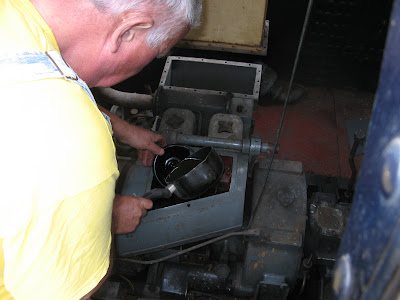 As far as we can tell from looking, Chertsey's engine is clean and well cared for, up to the point where it was sadly but inevitably neglected when the former owner became ill. Hopefully we have made a start towards freeing it up by pouring oil and diesel down the bores. If this is successful, we'll probably have it rebuilt (at vastly less expense, I understand, than doing a National...), and if not, there is another, already rebuilt PD2, that we should be able to buy. So either way it'll be good to stick with the Petter - after all, we've already got a National.

The gearbox is a Parsons, with a separate reduction box, which will be a new experience for me.

The electrics are neat and simple. There's no alternator, but there is a dynamo sitting on the floor... 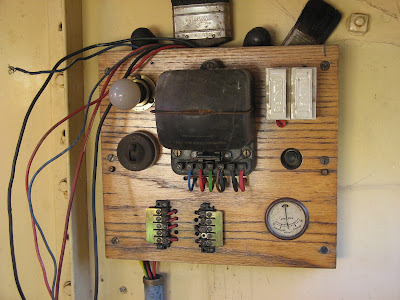 You'll have seen from the back cabin photo that there's no door in the bulkhead between the engine room and the cabin. I'm sure having a door there has more pros than cons (and they must have started adding them fairly early, because although I haven't checked, I'm pretty sure there's a reference to one in Idle Women) but I'm not about to start chopping it about now. So I shall manage without through ventilation when it's stuffy, engine warmth when it's not, easy access to the toilet and the reassuring smell of diesel to get me off to sleep.
Posted by S at 8:07 PM

I wonder what Gibbo would make of that!

16 amps maximum charge! Better stick to one plasma screen, and only a small jacuzzi in the hold :)

I'm looking forward to finding Jim surrounded by bits of Petter. He will, of course, be able to find all his spanners without problem.

If you need any more oil/diesel mix, I have about 35 litres currently available, specially touched with Lister goodness.

Perhaps I'm misunderstanding, but have never seen a GUCCCo motor that had any doorway between boatman's cabin and engine room.

I doubt any of the Idle Women boats ever did, TBH.

I sincerely hope you stay with Petter - I used to love 'em!

Anonymous said...
This comment has been removed by a blog administrator.
9:22 PM

Absloutely going to stay with the Petter - if we can't get this one going (and we're very hopeful) then there is another one we should be able to get.

Alan,
Re the door - I went and had another look at IW, and you are right. The bit I was remembering (her initial introduction to the boat), although it doesn't explicitly say so, seems to have taken place on a butty. Later she explicitly mentions the motor boat as having a solid bulkhead. So that's good; another bit of authenticity!