In and out the Angel 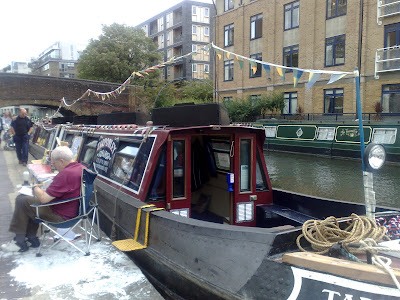 Sorry I've been absent for a few days. I did fully plan to post over the weekend, but my 12v phone charger didn't work, and doing the old interweb thing is quite power-hungry.

I spent from Friday morning until Sunday evening on Tarporley. Friday and Saturday we were running short trips as part of Kinks Place's arts festival. The festival events (there were lots of free and cheap concerts) seemed to be very successful and well attended, and demand for the trips was higher than it's ever been - we had our first ever sell-out one. Each trip involved reversing into Battlebridge Basin, then heading east through Islington Tunnel, down City Road lock, wind in the basin, back up the lock and back to King's Place. We did five trips on Friday and six on Sunday and I went on every one - we took turns to steer. So on Saturday - when we went back to City Road after the trips ready for Sunday's Angel Festival - I went through Islington Tunnel thirteen times, and twenty four times over the course of the weekend.

Winding in City Road Basin sounds - and indeed looks, from a vantage point leaning on the lock beam - much easier than it is. The latest lesson I have learnt is that having lots of space does not necessarily make the task easier - it can make it harder, at least when there's a stiff breeze (as there always is, there, apparently). Let us just say that I made a reasonable fist of it on Friday, but found the process very frustrating on the Saturday. Obviously I managed it in the end, or I'd be there still, but it brought me near to despair. Not near enough to wish for a bowthruster, though.

Anyway, Sunday bought the fun and frolics of the Angel Festival, and I was up bright and early attaching my bunting, which I must say was very successful. The main purpose of Tarporley's presence there is to recruit volunteers, and to raise awareness - and a bit of cash - with a raffle. By all accounts this was a successful year on both counts, and a very enjoyable time was had by all, although I was exhausted by the end of it. We were also introduced to the sweetest little dog, who is called Growler. After a tug. 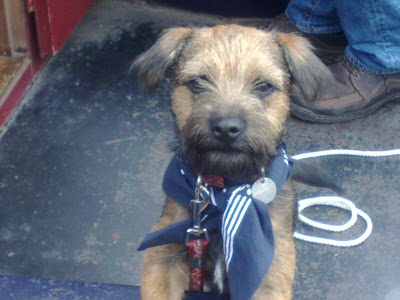 The step looks like a good idea - even if it appears not to have prevented someone having an accident with white paint! Hmm. Thinking about it a bit: you wouldn't want the bank a couple of inches lower than the step, as toes could get squashed.

Thankfully the paint way already there and dry before we arrived!