Earth has not anything to show more fair? 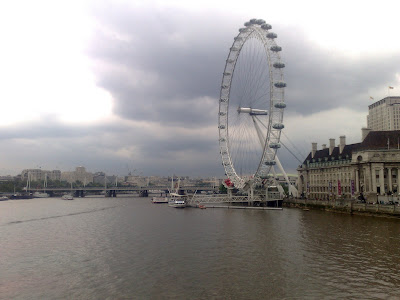 I rang my sister up on Wednesday, just because I thought it really had been quite a long time since I last made the effort, and she mentioned that she was going to be in London today, and might be able to meet up if she wasn't too hung over. I'm not quite sure why, but she suggested we meet at Embankment Station, so we did, strolled across Hungerford Bridge to the South Bank for a spot of lunch, and then wandered up to Westminster Bridge.

It was funny to be in the thick of tourist London, and odder still to encounter the - ahem - street theatre that fills the space between the Festival Hall and the London Eye. Imagine meeting someone and in all innocence asking them what they do for a living... 'oh, me? I stand on a box dressed as a policeman in a tutu. But - and here's the really clever bit - I stand very still.' Or 'I dress up as a stone wizard and move about very slowly, terrifying small children.' Quite impressive actually, the stone wizard. But ... why?

And then we walked on to Victoria so that she could catch the coach back to Wales, but there's no waterway in that (although we did watch two coots try to drown a duck in St James's Park).

Imagining being on a narrow boat on this bit of the river is quite mindboggling. It's not so much the width or the depth or the currents and the tides - although they would no doubt scare the hell out of someone saner than me. No, it's the size and speed of the other boats. It's really strange to see boats going fast.
Posted by S at 7:14 PM