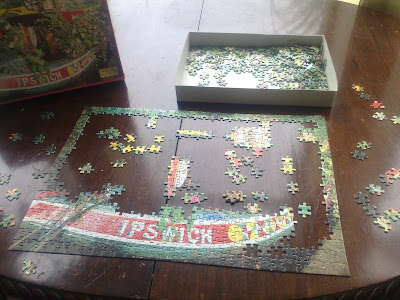 Now, I would not wish in any way to mock, or indeed to sit in judgement upon, those people whose idea of fun is doing a jigsaw puzzle. But. Oh my god, what is the point? It's the same with Airfix models. All that eyestrain, fiddling about, losing bits, cat knocking it off the table when it's nearly done... when you could get a much better result, and cheaper, buying a ready made Hawker Hurricane/boat picture/etc.

I can see the value and the satisfaction in creating something from scratch, a picture, whether a drawing or a photograph; or a model made from raw materials. But to spend so much time and effort reassembling something that has been created and disassembled for that very purpose strikes me at the very apogee of pointless activity.

So why the hell am I doing it then? Very reasonable question. I've started, so I have to finish it. I won't let it beat me. And that, I suspect, is how these things - which surely can't be inherently enjoyable - become grimly addictive. It's the competitive side of it. Who can have the most, the best, the most accurate model aeroplanes? Who can do that 5000 piece Mondrian jigsaw?

You will notice that I have done the interesting bits first. The foliage is going to be really trying. And I must confess to having had some help from Sebastian, especially with the patterns adjacent to the name, which were getting me very disorientated.

It might have looked like a bargain, at 89p in Help the Aged, but once I started peeling the labels off, I discovered that at some previous point, I might have purchased it in the PDSA shop for 49p. Missed it that time around. Might have been no bad thing if I had this time too. At least I wouldn't be cross eyed now.

Epilogue. When we were children and were given jigsaws by kindly but unimaginative relatives, we would complete them - I think my mother probably did most of the work - and then she would turn them over and number each piece sequentially before taking them apart again. Then we would do them again at a later date, which this time entailed just sifting through looking at the numbers and sorting the pieces into order. I hadn't thought about this for thirty years, but now suddenly realise how completely mad this was. Baz, on the other hand, as a child, would refuse even to look at the picture on the box when doing a puzzle, having got the idea from somewhere that this constituted cheating. I think it can safely be said that as a family, we just don't get jigsaws.
Posted by S at 2:18 PM

Sarah
You do realise that there WILL be one piece missing don't you?
NB Caxton

Hi! Was just looking at your blog again earlier. It is a good read. Yes... if I ever get that far. All those trees!