A motto for our times 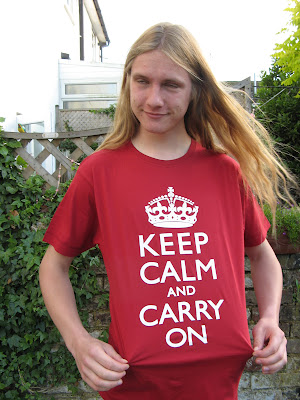 I first saw this on a poster in the window of a bookshop in Lewes. I wanted one, but (skinflint that I am) baulked at paying £4.95 for it, which is what they were asking. And forever after I was kicking myself. Then shortly before Christmas I used the wonder of the internet to track down the original supplier, and this time I got three posters - one for at home, one for the office, and one as a present for Dean, our wonderful School Administrator. (£3.60 each, if I recall correctly).

The story is that an original poster was found in a box of books delivered to a second-hand bookshop. They were very taken with the slogan and reproduced it. Supposedly around half a million were printed during WW2, using a specially reassuring typeface, and were being kept in reserve to be rolled out in an absolute crisis - which never came, so they were eventually destroyed without ever being deployed.

And I thought how great it would be to have it on a T-shirt, because it's just the sort of thing I'm always saying to other people, but I sometimes need reminding of it myself too. So I searched around, but could only find very expensive versions, and I thought it was a bit mean, too, others piggy backing on the efforts of the people who found and reproduced the original. But when I had another look at the weekend, I discovered that Barter Books (for it is they) also now sell T-shirts, and mugs, emblazoned with this sound advice - and at half the price (£12.60 - still not cheap for a T-shirt, but worth it) of other suppliers. So if you want one, give them a ring on 01655 604888 - it's easier than using the website, and cheaper than their ebay shop, I'm sure the nice man won't mind me telling you - and they'll put one in the post the next day. Surely a must for every boater.

A rather uncanny thing happened a couple of weeks ago... we had a meeting at work at which it was announced that we are going to undergo a very big and far-reaching reorganisation, and we all left reeling a bit, and when I got back to my office, my poster had partially detached itself from the wall and was hanging by half its blu-tack. I can only imagine that this was in order to draw my attention to it and note its soothing words of wisdom.

My other favourite motto, by the way, attributed to Roosevelt, is 'Nothing matters very much, and very few things matter at all'.
Posted by S at 6:43 PM