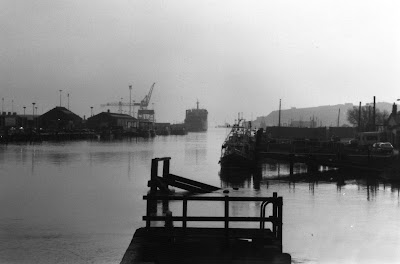 This is one of the photos I took of Newhaven in the late eighties. This is clearly looking downriver from the swing bridge at high(ish) tide. The basic scene looks pretty much unchanged today, but there are loads of differences in the detail. The most obvious - and most trivial - is the absence of the giant rubber shag (sorry, cormorant scuplture made from recycled tyres) in the middle.

On the right, the West Quay, the most notable difference is the absence of building, and the unimpeded view of the cliffs - this was before even the first phase of the West Quay development took place in the early nineties. There's now flats nearly all the way down. Here, there are fishing boats in the foreground; most are now concentrated further down the river, and there are fewer in total. New landing stages have been built in the last ten years or so, and some of these have already been decommissioned.

To the left of the picture, on the East Quay, is Big George the crane. I have no idea why it was called this. That's been gone maybe ten years or so. I think that in front of the ferry you can see other ships which would have been in the process of being unloaded. A lot of fruit and vegetables still came into Newhaven then, handled particularly by a firm called Fishers, and Fyffes had a banana ripening warehouse on the East Quay. That too has all come to an end.

Hi Sarah,
Just wondering if Parker Pen is still in Newhaven?
About twentyish years ago I worked for a large car leasing company in Shrewsbury and delivered many cars to their premises there as well as to their London offices. The London office door handles were formed as large replicas of the famous 'Arrow'; can't recall the Newhaven variety.
I do recall being the recipient of many varieties of Parker writing instruments and wish that I'd had the sense to hang onto them all!
Best wishes,
Eric, [a Brit in California]

Yes, Parker are still hanging on in Railway Road. Now owned by an American company - it was Rubbermaid, but I think they may have got taken over again since.

Are you serious? There is a company called Rubbermaid? What do they manufacture then? :)

A simply never ending range of useful(?) objects (Google). I think that Rubbermaid still own Parkers but I understand that only repairs and the production of ink is undertaken now. Rubbermaid bought Parkers off Gillette the razor people, I believe.
The most sucessful firm on the site now is Cash Bases which is a world leader in the inserts for cash tills etc.