What marvellous goodwill and festive karma is flowing around our little boating circle at the moment. On Saturday, as arranged, we welcomed Simon and Ann Moomin and Amy and James Duck (noms de bateau both) onto Warrior for lovely (even though I say it myself) mulled wine and mince pies, including some made by a junior Moomin, and handed over to the Ducks the generator and charger that Jim had arranged to sell them, and I mentioned - well, you have to keep the conversation going, don't you - our recently failed slime box (aka sump pump) and Moomin exclaimed, we've got one of those on Melaleuca, unused, the previous owners must have bought it and never fitted it... you can have it if you like, in exchange for that diesel filter that you're going to give me when you find it (it was behind the weed hatch, James)... and Jim also gave Simon some Dremel tools which apparently occasioned great happiness, so everyone was full of festive cheer, as we went off to the Jolly Sailor, and then on to the Railway, but ended with fish and chips chez Moomin rather than Chilli Hut curry. Jim dropped me off at Warrior - in its new space, note - to pick up the brown sauce, and of course, in the dark, I couldn't orientate myself sufficiently to locate Melaleuca (which hadn't moved) without some degree of consternation. I git there just before they sent out the search party.

Saturday dawned bright and fair so was obviously the day for rooting about under the sink to remove a small plastic box full to the brim with stinky grey sludge. Or it would have been if Jim hadn't left his jacket with the car keys (and thus access to all his tools) in the pocket on Melaleuca. Fortunately Simon was coming back anyway, and this was thus the occasion for another cup of tea and a chat about open source programming, before getting stuck in under the sink. 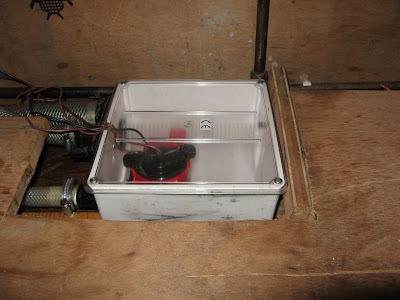 A simple job, no? Swapping one slime box for another... but of course, it would be too much to expect them to be the same size. The new one is actually superior in every way, being bigger and deeper and having a filter and a better float switch, but that half inch bigger was the bugger, when the bottom of the cupboard doesn't come out and the floor beneath it, through which the box must sit, is three quarters of an inch thick. So there was a little grunting and swearing, but thanks to Jim having brought his battery jigsaw, it was achieved, and it works absolutely fantastically. Who needs a new Whale Gulper then? Not us, thanks to Moominpapa.
Posted by S at 7:02 PM

Looks good: glad to be of assistance.

Because of a missprint :-)
What I meant to say was, it has an anti-Baz filter.