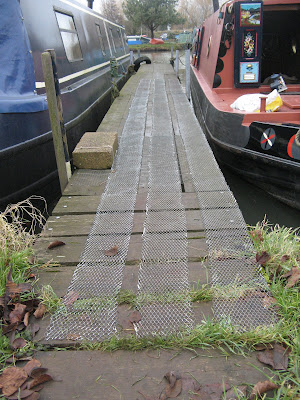 Our scenic new mooring spot is actually an older one, part of the original marina. And it has a wooden pontoon. Which is the most slippery thing I have ever tried to walk on, and that includes an ice rink. Imagine the most slippery surface you can, and then pour some oil on it. It still isn't as slippery as our pontoon. Fortunately, Jim had some expanding mesh, which he has already used to good effect on some wooden steps in the garden, and has applied this to the pontoon. It's even grippier than chicken wire, having rather sharp edges. So it's just as well we're not likely to fall over on it now, as it's a bit like a giant cheese grater.
Posted by S at 7:29 PM

Exactly the same here, like a skating rink, real dangerous, & these pontoons are only a coupla years old