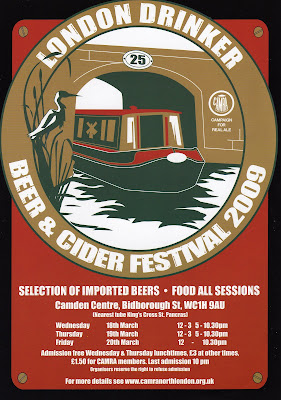 Much as I love beer, I don't go to beer festivals very often - in fact the last one was at the Star in Huddersfield, that's how long ago it was.

This is largely because , in the words of my most apposite, if not my favourite, Shakespeare line, 'I have very poor and unhappy brains for drinking.' I've been working on it, over the years, putting in lots of practice, and I think I'm improving, but I don't really have the capacity for alcohol that full appreciation of a beer festival demands. Wimp.

But even if I don't go myself - and I might pop by one lunchtime. Or two - I thought I would put in a plug for the North London branch of CAMRA's festival, very conveniently located round the back of Camden Town Hall just off the Euston Road. During the course of the event they are going to be collecting money for charity - and that charity is the Camden Canals and Narrowboat Association, aka Tarporley.