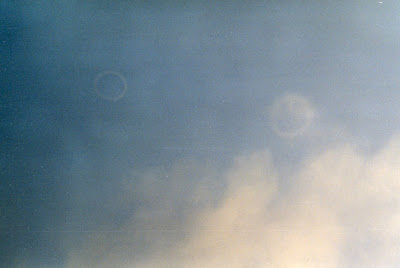 To fill up the space when I can't think of anything to say during the month of March, I shall be reminiscing about our first voyage with Warrior, when we brought the boat from its mooring at Hargrave, on the Shroppie just south of Chester, to Stretton Wharf where it was to remain for the next year. This was just before I started the blog - at least in earnest - and I have raided my drawer full of shiny prints to bring you.... some pretty smoke rings, just before we set off. We began our journey - me, Jim and Baz - on April 9th 2006, after first having visited Huddersfield to replace Andante's window and clear up the broken glass following what must have been one of West Yorkshire's least productive burglaries.

I know what we did and when because it is all in The Red Book, a hardback notebook that I bought in Wilko's in Huddersfield to be our log for our new boat. So far we have kept it up fairly assiduously. It is interesting to note that on this day Warrior's engine was difficult to start and running very hot... which was solved by removing the thermostat. I suppose we should have known then not to put it back.
Posted by S at 9:08 PM

We were looking at some old mags to read up on the K&A and it just fell open at the page about Warrior.
Brian