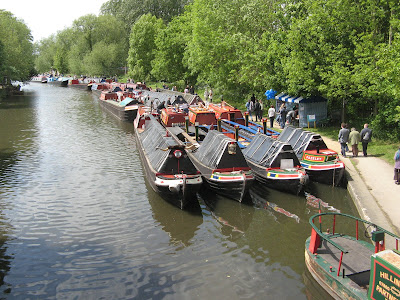 With hindsight it would have been better to go by car, but we didn't, we went by train and sampled the delights of the outer reaches of the Metropolitan Railway - today they were running a vintage train, but not yesterday, when we went, and anyway, it was £20 a ticket, but as Jim says, they have to pay for its upkeep somehow.

I was pleasantly surprised to see what a turnout of old boats there was; we met up with Chiswick again, and Mike on Victoria, and saw many others. Stafford was there, the josher famously restored (if that's the right word for a full length cabin conversion) in Poland and currently up for sale for £150,000, and I have to say it didn't look all that impressive. 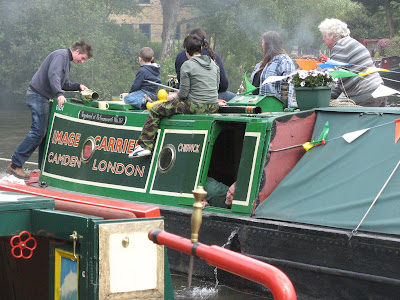 James does something fiendish to the engine

We were cheering Chiswick on in the first round of the tug of war, when John and Mary on Lincoln, a Hawkins boat with a RN DM3 running on waste oil, whom we met at the Uxbridge banter, invited us to contribute to their ballast in the next heat. From there we had an excellent view of proceedings. When that heat was over, Jim jumped ship to Victoria but I stayed to have a bottle of beer and enjoy the spectacle.

A couple of rounds later Chiswick was comprehensively overhauled by one of the Bantam tugs present, and followed that immediately by taking on another one - I think the second one was Wigan. Chiswick seemed to hold its own a lot better this time, but a select few were able to observe that it had in fact been tied to Callisto, which was tied to Victoria, which was tied to the bank... I'm pretty sure that the crew of Chiswick remained blissfully unaware of this favour.

After a few more rounds, and once Jim got back to the right side of the cut, it was definitely time for something to eat so we set off for the beer tent and food. The food was a bit of a diasppointment, lots of commercial outlets - where oh where were the KESCRG with their lovely veggy curry? But we had some Indian kebabs and followed them up with a couple of Cornish pasties (yes, well, it was tea time by now). There was also a very commercial funfair, and all this part was much busier and more crowded than the towpath. I was however able to indulge my compulsion to purchase hippy festival clothing, this time adding a pair of silk 'Afghan trousers' to my collection. Very fashionable this year, I'm given to understand. All the stars are lining up with great swathes of fabric hanging between their legs. Very practical though, silk, when boating. Screws up very small without creasing to be brought out for that one occasion when you need to look vaguely smart/clean/festive/female.

Then we strolled back up the towpath and following years of mutual blog-commenting finally met Jo and Keith on Hadar, who were lovely. We chatted for ages and I got shown over the boat, which is a masterpiece of simple design.

By then it was half past six and we decided to make a move for home. The uncharming ticket collector at Rickmansworth station insisted on relieving us of another £3.20 each on top of our All Zones Travelcard (you may wish to note for future reference that 'all zones' does not include zones 7 and 8), despite his charming colleague when we arrived assuring us that we would be 'very unlucky' if this were to occur.

Nonetheless, it was a lovely day, and I'm very glad that we went.
Posted by S at 6:50 PM

Is that a steering wheel as well as a tiller on the boat in the foreground of your top picture?

That is the famous Stafford,,,,

Thanks Sarah. Could you, or someone else reading this, point me towards some more information on this boat?

That certainly in not 'Stafford', famous or other wise. I know 'Stafford' is not that great esp. for £150000 and I know that it is not a big Woolwich but really!
It is in fact the Hillingdon Community Trip Boat, which your other hat should allow you to recognise a brother 'Commuuuuuuuunity' boat

edit
'as' after recognise

Hi Sarah. Thank you for the lovely mention. Keith and I really enjoyed your visit and we look forward to seeing you again sometime. I can now add you to the boaters we have met yayyy. Jo

Are you sure? In which case perhaps I should remove my assertion to the contrary. But is that not the very boat up and down whose roof Baldock was dancing?

Yes, of course, the FIRST picture. I hadn't realised there was one in the foreground (and had probably also forgotten that there was another picture). Yes, that is a community boat.

Charmed I am sure