Somewhat after the event, I return to my visit to Newport. On Sunday, I really wanted to go looking for the canal, but Ali had decided that first of all a visit to Abergavenny would be in order. I'm not 100% sure why; this may be the 21st century and all, but there still isn't a great deal of entertainment to be found in a small Welsh town on a Sunday.

So we came back, and then I said, we must go and find the canal now. But we had no idea where to start really, and we hadn't taken the map with us. We started off going completely the wrong way, heading for the area that was named in the photo of locks I'd seen in the pub. I knew it didn't feel right though; we were headed up hill and into the posh bit of town. So we turned around, and found ourselves watching a great bigh parade of scouts, sea cadets etc. What was this, we asked one of the marshalling policemen. St George's Day parade, it turned out to be. In Wales? How odd.

Anyway, Ali has a friend who lives in Canal Street. This I thought was an enormous clue, but, unfortunately, she could never remember how to get to her friend's house. Out past Wickes and by the dual carriageway, a guy in the pub had said, so we set off in that direction. And sure enough, there it was. 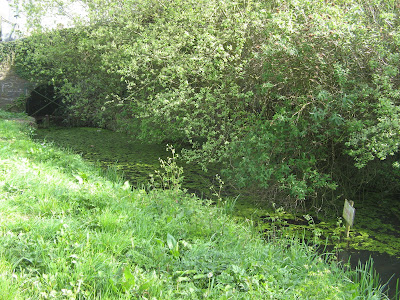 My first sight (since the school trip to Ironbridge in 1982) of a disused canal. Now, you can either follow the main line towards Cwmbran, or the Crumlin Branch, to a place called Fourteen Locks, which is apparently very pretty. According to this sign 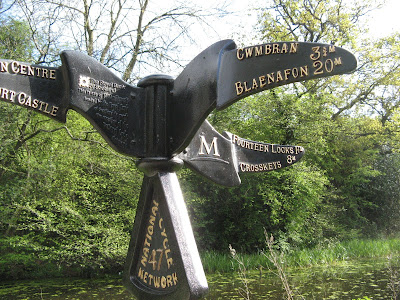 we took the latter route, although it did not entail turning off; the other route forked off to the right under the road, where the canal ran in a concrete trough. 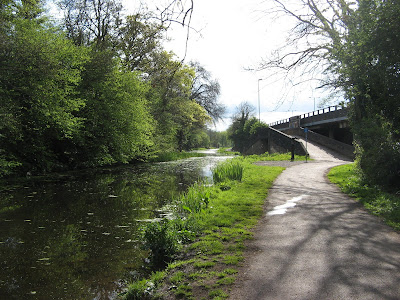 The first couple of locks, although dry, had new gates, which was rather intriguing. I know there are plans to restore the canal from where it is currently navigable to all the way down to Newport, where apparently it will join the Usk (I just read about this in the IWA magazine). 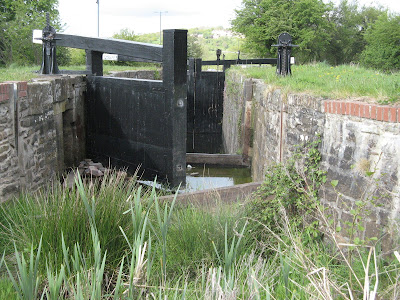 I guess there must be a reason for starting at the furthest end. As we progressed away from Newport the canal got more overgrown, and the locks more derelict. 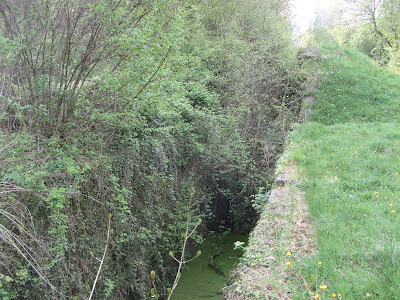 However, none looked irretrievable. There were also some lovely relics that had somehow survived without being removed to a museum or scrapyard. 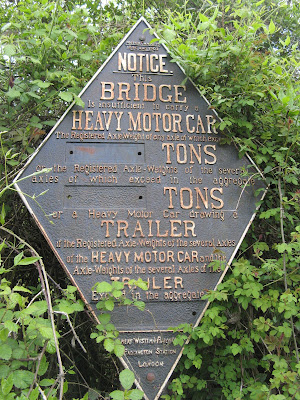 We never got as far as Fourteen Locks, as it had been a long day, I had a cold, and we were still carrying our shopping. But it was a lovely walk and I only wish we'd started it sooner and made a day of it.
Posted by S at 7:06 PM