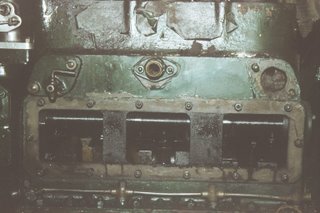 Just a quick post today - firstly thanks to Mike for picking up on yesterday's rant and making me feel like part of the blogging community! Secondly, if anyone ploughed through the post about Warrior's engine and thought they detected the odd schoolboy (girl?) error, well all I can say is hopefully they're gone now.

We're off to Braunston tomorrow, armed with a set of paint colour chips in various shades of mid to dark green which we will be holding up to any National engine we can get near enough to. Warrior's engine is currently painted quite a dark green, and a cursory examination hasn't revealed any other shades underneath. While at Daventry we saw two engines - one RN and one National - nearly completed and both painted the same shade of what I think of as 'park bench' green - lighter and brighter than Warrior's. It seemed to me that it would be a bit of a coincidence for a separate company, having licenced the design from RN to make under its own name, to paint its engines exactly the same colour - surely National would already have their colour schemes established?
Posted by S at 9:15 AM