A trip to Daventry 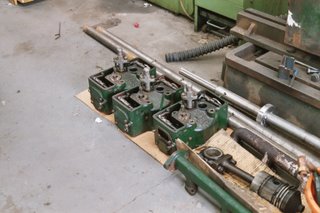 We took a brief day trip yesterday to Daventry, to visit (aah!) Warrior's engine where it sits in the workshop of the Russell Newbery Diesel Engine Company. This trip was to find out their first impressions of what sort of state the engine's in, and also do do a bit of bridge-building, having got off to a rather shaky start with one of the RN mob who, let us say, hasn't exactly been to the Dale Carnegie school of customer relations - although, to digress here, as I am wont to do, I'm not entirely convinced that it's a bad thing that there are genius engineers (for such, we are told, this person is) out there who don't subscribe to the bland 'have a nice day' approach. Anyway, yesterday we talked mainly to the bearded contingent (David and Ian) who were very nice and helpful; Ian in particular is very good at explaining things, without even seeming to notice he's doing it. So we are now committed to Warrior's engine receiving their expert care and attention, having been told by everyone we've talked to about it that they might be grumpy and miserable, and they might be slow, but that nobody will do a better job.

So what was the verdict? Well, no nasty surprises, at least as yet. The block seems to be in good shape, full of rather frightening sludge, but David says that's normal. The pistons are in OK shape, but we will probably replace them anyway - they need new rings, and they're cast iron, which means they shouldn't be used above 800 revs, which apparently we would want to do, so we will replace them with alloy ones. The crankshaft is going to be thoroughly inspected and sent off to Guildford for an x-ray (aah again) but on cursory inspection looks to be OK. The camshaft is going to be remade on a special machine they have for the purpose (they have a lot of old machines).

We will have a new alternator as supplied by RN. The starter motor, while not original (the engine was originally hand start) is an old and repairable CAV one, in pretty good nick, so that stays. The water pump is a bit more of a poser - the previous owner noted that water pumps were constantly wearing out and it turns out that this is because they were attached to far too large a pulley, making them run about six times as fast as they should. There's no space at the flywheel end to add a smaller one, so we are left with two alternatives. One is an electric water pump, which we'd like to avoid for authenticity's (and reliability's?) sake. The second is that on the front of the engine there is a cover, which apparently covers a spindle that would originally have been used to drive a water (presumably raw water) and bilge pump; it may be that this can be adapted for the purpose provided it won't protrude too far into the gangway. We won't need a fuel pump (it previously had an electric one fitted) as we are having a gravity system installed - they've already made the day tank, although we haven't seen it yet.

The gearbox was quite a nice surprise, in that it turns out to be quite sound. It is (we're told!) an early Bruntons box, 1:1, all metal parts, very simple. It looks like it might require a slight modification to the propshaft to allow some backwards/forwards movement, and this may be why it wasn't engaging effectively before. The gearbox does sport a National plate with the engine number on, which is what led us and previous owners to think it was a National box. We're still pretty sure it's the same box the engine has always had, but was the plate put on by an owner, or were these Bruntons boxes badged by National?

After this successful visit to Daventry we went on to Whilton to have lunch at the garden centre at Whilton Locks, and then we made a move for home - all in all the round trip took from 0730 until 1700 - and we weren't more than an hour at RN. We'll be doing pretty much the same trip on Saturday when we're going to go to Braunston - I've volunteered to drive, as long as my beloved Bluebird is back on the road by then. The cars are another story, but when Warrior news is slack I might get round to it!

Will try to add an engine-in-bits photo later, but I haven't yet joined the world of digital photography so have to wait till I've finished the film and got the pictures back!
Posted by S at 1:34 PM