What sort of a boat is Warrior? 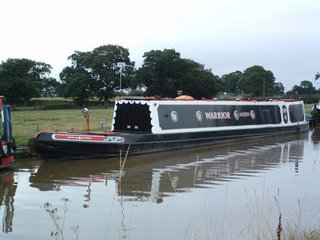 What Warrior looks like - but ignore the paintwork - that's going! (Believe me, it looks worse close up)

Last month in Canals and Rivers magazine, Phil Speight was expostulating about the way any old (or new) boat with a bit of a curvy fore end and/or a few washer rivets gets sold as a josher - and it's true, you only have to look at the ads. His point was (I think) that this devalues the skill and effort of those few people who build/built faithful josher replicas, as well as rendering the term itself - which should be very specific - pretty much meaningless. He also had a few digs at boats that are called tugs because they have a longish foredeck and portholes.

It is into this latter category, of course, that Warrior falls. I don't have much problem describing Warrior as a 'tug-style narrowboat' (it's a fairly widely and consistently understood term), but a tug it definitely isn't. Although, with the engine it's got, I suppose there's no reason why not! Looking at real tugs, their proportions are noticeably different; generally, more foredeck, less cabin, and less length overall (Warrior is 54'). After all, generally speaking they neither carried goods nor were lived on; apart from the engine, what did they need space for? (Not a rhetorical question, I would actually like to know.) There are some leisure boats about that do suggest those proportions more accurately, but at the cost, obviously, of accomodation.

Warrior has a fairly distinctive fore end, more suggestive of an icebreaker than anything else, I think. I've asked John Shotbolt (the builder) whether the design is based on any particular boat or style of boat, and the answer was no. That makes Warrior a real one-off, as it was the only tug (-style narrowboat) he ever built. An interesting, characterful, nice looking and well built one-off. And that's before we even start talking about the engine, which is, as far as we know, unique on the British inland waterways system. That'll do me.

Having said all that about how Warrior doesn't really look much like a real tug, that is how we're going to paint it, when the time finally comes. We might even attempt a bit of tromp l'oeil to make the cabin look shorter, at the very least keeping it very plain toward the front. All part of the compromise inherent in canal boating between history and practicality.

Returning to my starting point, why even try to ape the shape, style or appearance of old boats when we all know it's fake? Not to recreate history, create a floating museum, or romanticise life on the working boats, but quite simply because those old boats are the most beautiful. And if you're going to do something, then you should do it the very best you can.
Posted by S at 2:30 PM