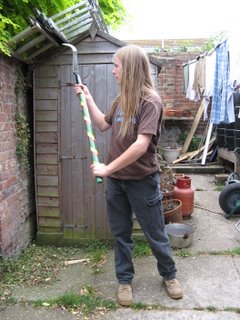 So don't go away!

The new car (1992 Volvo 940, £175 since you asked) is packed to the roof, and we will set off tomorrow morning for Huddersfield (I know I was in Huddersfield already, but I came back yesterday), to leave for the last time in Andante. It would be rash in the extreme for me to so much as suggest that there will be any updates to the blog while we're away. While I have carefully read Mike's handy wi-fi facts, and in fact have printed a copy to take with us, I doubt very much that we will have either the opportunity or the technical ability actually to get online whilst en route. We're taking the laptop, but that's mainly to store the photos and for Number One Son to watch DVDs (I don't want to be responsible for him dying of boredom. When we invited him along I kind of forgot to mention that there wasn't a telly.)

In the above photo, Lockboy demonstrates the Weed Weapon (Jim has another name for it which relates to the young people he expects to encounter on certain urban stretches, but we won't go into that). This is an ancient tool which Looks As Though It Might Be Useful On A Boat, lovingly restored and painted by Jim. I don't know whether he'll be repainting it in Warrior's colours once we get there, but it's in Andante's for now.

So, I promise we'll be back in September with the highlights of the trip. Meanwhile, wish us luck!
Posted by S at 5:34 PM