So, farewell then, Huddersfield 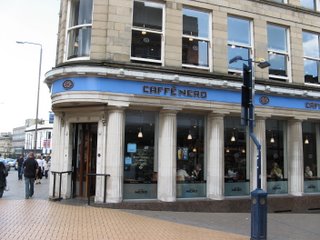 I'm not actually leaving, finally, until Saturday (my last day at work is Thursday) so this will be a week of farewells and souvenir photos of this rather lovely town. Like all big towns, at ground level it's a bit grubby, and it has its share of cloned shops, but if you look up it also has some fantastic buildings, and has managed to hang on to more of them through the 60s and 70s than many comparable places. It also has two canals - now prosaically called the Huddersfield Broad and the Huddersfield Narrow, but originally Sir John Ramsden's Canal and the Huddersfield Canal respectively. Andante's mooring is just on the broad side of Aspley Basin, the site of the old trans-shipment wharf between the two - no integrated transport policy in those days either.

There are two facts about Huddersfield which I'm very fond of trotting out, having taken the trouble to confirm them with a nice chap in the planning department at Kirklees Council. One is that Huddersfield is, in terms of its population, the largest town in the UK that isn't a city. Why be a medium sized city if you can be the biggest town? I mentioned this to a person from Northampton, at a conference earlier this year. Predictably, he said, 'No it isn't, Northampton is.' I then went on - in the next breath - to tell a woman from Liverpool that Huddersfield has the greatest number of listed buildings in Britain after Bath (some accounts say Bristol) and Westminster. Her reply was equally predictable - but I have that one on the authority of the Guardian as well as the man from the council. Unless of course you know different, as they used to say on That's Life.

Tonight I am going on a guided architectural tour organised by the Huddersfield Civic Society, a thoroughly sterling organisation.

Why the photo of such a relatively nondescript building to head this post, then? Well, the George Hotel in Huddersfield is well known (among people that like to know that sort of thing) as the birthplace of rugby league. And Caffe Nero in Huddersfield will go down in history as the place where we signed the papers and took possession of Warrior. Although only because the woman in the bank over the road who was supposed to be sorting out the money had gone to lunch.
Posted by S at 1:51 PM