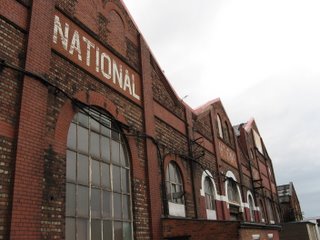 Ashton-Under-Lyne: according to David MacKie in the Guardian (no, I'm not putting a link in; it's not that imortant), a Mecca for tripe lovers. On our travels I did see a retail outlet called The Tripe and Sandwich Shop, but strangely enough wasn't tempted to go in. ('Can I have some tripe please? Oh, and a sandwich ...') Our pilgrimage was not in search of tripe, or any of the other things for which Ashton is no doubt rightly famed, but the National Gas and Oil Engine Company Works. We weren't even sure they were still standing until we got chatting with Guy at Portland Basin Marina where we spent the night of Thursday 17th, but he told us that they were indeed, and that they were nearby, and showed us on a facsimile 1907 map of the area. We were so impressed we bought one. Guided only by this, we set off the following morning, in the rain (ho hum), to seek the very spot where Warrior's engine was built in 1937.

Finding it was a bit of a struggle, owing to a ring road having rather inconsiderately been built at some point in the past century, but find the place we eventually did - and very impressive it was too. Now an industrial estate, the extensive site is still largely made up of the original buildings. Some have modern cladding on, but many don't, as can be seen in the picture. Under the later, painted, names, the words 'National Gas Engine Co. Ltd' can still clearly be seen picked out in the brickwork (although not necessarily in this photo).

It was particularly heartening to see that the site was still being used for manufacturing and appeared to be quite busy and bustling. We got chatting to the people in one of the units, and they let us have a look inside; again, much of the building seemed to be, if not original, then certainly as old as our engine. And we spotted something very exciting. The steelwork supporting the roof was painted in a horrible shade of dirty lime green. We thought that it wasn't unlikely that a company making engines, and having quantities of paint about the place, might use the same paint for the buildings as for the engines ... Of course, the steelwork could have been painted much more recently, but nonetheless I made a careful mental note of the colour.

The following Friday, after we'd arrived at Stretton Wharf and Jim had collected the car from Huddersfield, we went to Wolverhampton to collect the crankshaft (another story) and dropped in on Phil Speight to pick up the paint we'd ordered for the engine, now thinking that it might have been entirely the wrong colour after all. But for some reason it had been made up in coach enamel rather than engine enamel, which was a true blessing in disguise as it meant that we could go back to the drawing board. Phil got out all his colour chips again, and while he and Jim pored over various sensible shades of green, I picked out the one that reminded me most of the engine works. Phil very kindly lent us some of the chips to take away with us and consult further ...

Fast forward finally to our journey home yesterday, when we dropped the crankshaft off at RN in Daventry. Considerable progress is now being made on the engine (again, another story) and it is now in about as many bits as it is possible to reduce an engine to. And on many of the bits that hadn't seen the light of day for decades there were distinct traces of a much brighter, lighter green paint. It matched my chip perfectly. This is enough evidence for us. We are going to stick our necks out and paint Warrior's engine a colour called Muscat. If it does turn out be be wrong, at least we will be able to explain why it seemed like a good idea at the time.

So our morning in Ashton was productive as well as enjoyable and exciting, and I'm very glad we went!
Posted by S at 7:31 PM

We live in Israel in the village Peki'in in the north.
Lately we picked the olives in our garden ands went to the local factory where there is an olive press. Outside I discovered the remnants of an old engine with a plaque on it:National Gas and Oil Engine Company Works
It is a horizonbtal oil engine, originally used in Palestine. I tjink it is about 100 years old.