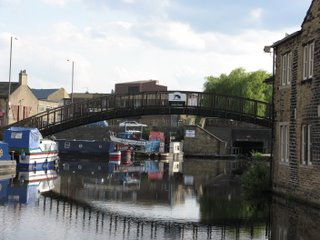 This is the view from Andante, on her proper towpath mooring, looking towards the Wakefield Road and the Narrow Canal and, on the left, Aspley Basin.

Observe the pretty rustic bridge. Or, in fact, the pretty useless bridge, as it has been closed for months and months. It is closed because it is unsafe. Even when it was open it was patently unsafe. It's curvature is such that you needed crampons to cross it in the winter, and it swayed alarmingly when induced to do so by the revolting offspring of patrons of the Brewer's Fayre. The grippy bits which were attached rather half heartedly to the wooden treads (what you can't see in the picture is that there are sloping steps either side of the big sloping bit in the middle) were all detaching themselves to become trippy bits. And to top it all there was a sign saying 'no more than four people on the bridge at once'. (Four slender wiry boaters? Or four Brewer's Fayre customers?) Which doesn't inspire great confidence.

Now what I can't work out is why the bridge was built like that in the first place. It hasn't been there all that long. The photo here (scroll down a bit) (pre-restoration, presumably, but post 1977 from the horrendous University edifice dominating the background) shows a bridgeless scene. Why does it need to be so high? (Compare it to the Wakefield Road bridge beyond on the right.)

The bridge is, apparently, to be rebuilt. Eventually. We cannot blame poor old BW for this one, it seems (though I shall be blaming them for something much more malign in a couple of paragraphs' time) as it appears to be owned by Whitbreads. A planning application has been made (it's a conservation area and, IIRC from the notices, bits of the stone bridge piers are listed. But how?? They weren't even there 30 years ago). However, it will all come to late for me to be able to visit the toilet.

Oh yes, now we come to the seething rage that I have sustained for the best part of a year. BW have built (relatively) glitzy new toilets and showers on the other side of the canal opposite the basin. These were quickly, if not easily, accessible via the footbridge. In the absence of the footbridge, you have to use the road bridge, which means walking round the basin, which takes about ten minutes. OK, no great hardship, but when I first moored here, totally unnecessary, because there was a toilet on the towpath side, set into the back of the 'pub', with a great big BW toilet sign on the door. It was in a very sorry state, and the amenities were basic, but I didn't care, because it was MINE! I cleaned it up, and kept it clean; I remembered to take a torch and my own loo roll, and in the summer other boaters used it too. Everyone was happy.

Then one day I came back from work to find the BW toilet sign gone and a suspiciously shiny new lock on the door. I rang BW and had a conversation that went very roughly like this:
Me: What's happened to my toilet?
BW: We had a complaint about it so we closed it.
Me: But it was a valuable resource for me and many other users of the canal.
BW: It was substandard so we closed it.
Me: But I didn't mind! It worked!
BW: We consulted with our user groups and they agreed we should close it.
Me: How can I get involved in these consultations?
BW: You can't. They're not for boaters, just for organised groups like the Sea Cadets. We don't consult boaters.
Me: Won't you reconsider? Lots of people used it.
BW: No. We've invested in lovely new facilities on the other side of the canal.
Me: But they're on the other side of the canal. It wouldn't have hurt to keep this one too. You didn't even have to clean it or anything.
BW: We had complaints that it was substandard so we closed it.
Me: Complaints? You said a complaint before.
BW: Ah, now you're trying to twist my words.
Me: (banging head on desk) Aaaagh! Everything anyone has ever said about British Waterways is true.

Wouldn't tell me who made the complaint of course. Interestingly though, I blu-tacked a note to the door with the BW phone number in case anyone else wanted to ring up and protest, and it was ripped down overnight. I don't suppose it was BW did that.
Posted by S at 8:18 AM