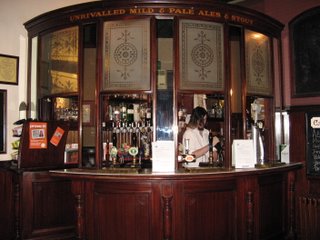 Strictly chronological cruising (b)logs can perhaps get a bit boring, so I'm going for a more thematic approach in writing up this trip. Today: where we spent our evenings. Which, as it turned out, was more often than not in a pub - sometimes two. It wasn't our intention to eat out most nights, but as things turned out I think we probably did. And we were on the whole incredibly lucky in the establishments we found, given that we were guided only by a pair of not terribly up to date Nicholsons.

Our last evening in Huddersfield (Saturday 12th August) was spent in the company of Geraldine and Trevor from Annabel - fellow moorers at Aspley Basin. We started off in the Albert (to give it its full inexplicable title, the Albert Buffet Hotel). Contrary to what I was previously led to believe, the application earlier in the year to have this splendid Victorian building (photo above) listed was unsuccessful, which is quite worrying, although the new landlord seems to be committed to preserving the interior and getting lots of interesting beers in. We followed this with dinner at the Shabab Indian restaurant, where the food was pretty good and the setting was lovely.

We set off on Sunday morning and got as far as Slaithwaite - five miles, 22 locks. Normally boats going through the Standedge Tunnel in this direction go up as far as lock 32E on their own, with BW unlocking the ten locks above that and seeing boats through. Because of the shortage of water this week, however, we had to wait to be taken up from lock 25E, just above Slaithwaite. Monday night was spent on the towpath between locks 24 and 25E. Both Sunday and Monday evenings were spent in the Wharfeside Inn - unprepossessing from the outside, but owned by Skipton's Copper Dragon Brewery, and incredibly friendly with excellent beer. On the Monday we also ate there, and the food was fine, if not great.

Tuesday evening was spent, as long planned, in the Tunnel End Inn at Marsden, while Andante was moored at the mouth of the tunnel. This pub fully lived up to its promise and reputation for good food and beer, and could not have been more friendly and welcoming. We had two really good meals on this trip, and this was one of them. Normally food - all home cooked - is only served Thursday to Saturday, but if you're going through the tunnel and ring in advance Bev and Gary are delighted to dish something up. (I've tried to stop this sounding like a restaurant review in the local paper, but I'm afraid it just can't be helped.)

I have no record of our having gone anywhere on Wednesday evening, when we moored on the towpath between locks 10 and 11W. Thursday evening, when we moored in Portland Basin Marina, was spent in a launderette in Dukinfield. We arrived just as the owner was locking up and he very kindly let us in so that we could spend two hours watching our smalls revolve and emerge triumphant with dry clothes (not to stay that way for long). Is there any more reliable timewarp than a launderette?

On Friday we had our other really good meal, at the Ring 'o' Bells at the top of the Marple flight. Again the beer was good and the service was very friendly. On Saturday we had our only bad experience, at the Fool's Nook by the swing bridge at Royal Oak. It had been a horrible wet day and we were probably at our lowest ebb. The place was well written up in Nicholsons, but the reality bore no resemblance at all. It was full of smart casual people - god knows where they had all come from, as it was in the middle of nowhere, but it was most definitely not a boaters' pub. We asked about food, were looked up and down, and after a brief consultation between the staff were informed that they were fully booked. So we finished our extra-cold Bass and went back to Andante, where we lit the stove, put Born to Run on the CD player, cooked some spaghetti, and congratulated ourselves on a lucky escape.

Sunday was a two-pub evening, at Hardings Wood Junction. The Blue Bell, which we were moored right by, is feted for its beer but doesn't serve food, so we went first to the Red Bull for dinner, which was very nice. Somehow we got chatting to a splendid couple called Clive and Christine who were liveaboards in the 1970s, and they followed us on to the Blue Bell afterwards. The Blue Bell had lots of character and atmosphere to go with the beer, and I don't actually remember a great deal about the rest of the evening ...

At the Star at Stone, where we went on Monday night, the food was adequate, if uninspiring and relatively expensive, but we had a great evening with Tony and Sheila, with whose 27' narrowboat Owl Andante had shared locks during the day. Tuesday evening found us in Penkridge, on the visitor moorings above lock 38. We wondered around and looked at four different pubs, but none of them looked inviting. The only one serving food was rather posh and looked a bit weak on the beer front. One we didn't look at was the Cross Keys, as a pleasant young man sitting drinking Special Brew by the lock told us it was a bit rough, although we've since been told by others that it isn't, so maybe we missed a treat there.

And the next day, we arrived at our destination, with just one more pub to visit - the Bridge at Brewood. This seems to be the hostelry favoured by regulars at the yard, although when we asked for recomendations we got sent off to various other places: the Hartley Arms at Wheaton Aston (nice if a bit restauranty), and the Vaughan Arms at Lapley (so bad it was good in a horror story sort of way). The Bridge was great, with freshly cooked food at very reasonable prices, and, to Jim's delight, Jennings' Dark Mild. So, sorry chaps, your secret's out. The Bridge is our new local.

Anyway, this was the best pub crawl I've ever been on.
Posted by S at 8:53 PM