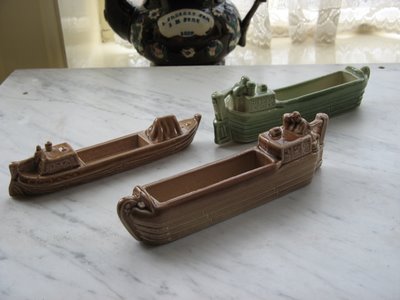 I was dusting the other day and found myself fiddling about rearranging these Wade narrowboats. The smaller one Jim bought years ago, before we were anywhere near having a real one, at a jumble sale for 50p. The others came later, for eleven and fifteen pounds respectively.

The bigger ones, which must be butties or horseboats, have much bigger steerers; I usually arrange them so that they're having a friendly chat as they pass each other. The smaller boat, which is called Heron and owned by one John Wilson, is also, judging by the rudder, not a motor boat. This one appears to be in the water, whilst the others have so much freeboard they look like they're sitting on dry land. To be proportionate with their beam, these boats would need to be 15" long rather than the eight inches they actually are. But they're still lovely little things - and they are meant to be a 'pin dish' and 'posy vases', not scale models.

Not so this Hornby model narrowboat, intended to add realism to 00 guage railway layouts. While its proportions are no doubt perfectly to scale, much else about it is decidedly odd. It's described as a 'butty boat' while its tiller strongly suggests a motor; its cabin/engine room looks rather long, and its cloths look to be all ruched up in a way I've never seen on any real boat - more like a curtain-sided lorry. This is a shame; I don't think Hornby would try to get away with such a slapdash rendition of a locomotive or even the most insignificant bit of rolling stock.
Posted by S at 1:58 PM