Why British Waterways are wonderful 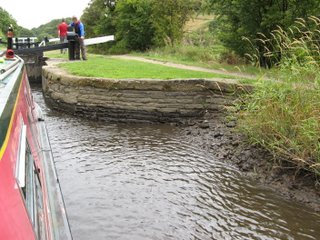 Of course, there are lots of ways in which they are not; we've all come up against their obduracy and inexplicable decisions at some point - but (to me at least) it is amazing that they exist at all. British Leyland; British Road Services; British Rail; almost every other nationalised body you could think of - dead and gone. Sold off; sometimes successfully (BT); sometimes resulting in chaos (BR). But British Waterways carries on, almost unnoticed, like the platoon that doesn't realise the war's been over for years, or the Soviet clerk who turns up to work every day and gets paid, but no one knows he's there. Surely if the government realised BW existed, they'd have privatised it by now? Think of the property portfolio! I know BW are going down this road themselves, by being more 'enterprising' and trying to become less dependent on direct government funding, but (whether we approve or not) that can be seen as a defensive move in a strategy to protect their position.

The wonderfulness of British Waterways was brought home to me by our Huddersfield Narrow trip; the first time we'd had much continuous contact with BW staff 'on the ground'. Not only were they unfailingly helpful and cheerful and friendly, there were so many of them! Getting us, and the others, up to the summit and through the tunnel is a very labour intensive process. The cost of maintaining the tunnel and providing and maintaining all the tugs and passenger modules must exceed the revenue they bring in by a factor of thousands - and keeping the tunnel navigable is clearly not necessary to any water supply function. Yet still they do it; still the taxpayer pays for it. Because it's there, and it's their function - albeit maybe a vestigial one - to do it.

In an age when everything has a price and the idea of getting something for nothing is held up as being self-evidently abhorrent, that's why I think British Waterways are great.
Posted by S at 10:01 AM