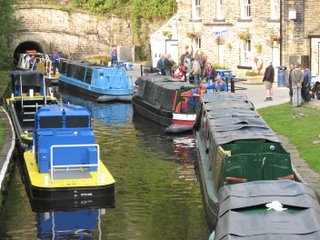 No, not this Standedge Tunnel Experience, but our very own experience of the 'longest, highest and deepest' canal tunnel in Britain, when we went through on August 16th in Andante.

Someone asked me 'was it worth it?' - to which the answer has to be yes, as it costs nothing (if you are a long term licence holder), and it's got to be worth the time and trouble if it means you end up where you want to be. It is, of course, an experience not to be missed: the preparation, the excitement, the sense of achievement, the awe and wonder at the building of it, and even greater awe and wonder at its restoration.

The tunnel itself? It's a very long tunnel, and you go through it very, very slowly. (Three and a quarter miles in two and a half hours.) You can note that some sections are brick lined, some sprayed with concrete, and some (the best bits) bare, red, stone. You can see the drill marks where the blasting powder was inserted, and count off the leggers' plates on the roof to see how far you've gone and how far you still have to go. You can (upon donning a hard hat) sit outside at either end of the passenger module, which is a better way of seeing things when the windows get steamed up.

Because it is such a feat of engineering and restoration, and so many people are going to so much trouble to get you through, you feel as if you ought to find every single yard of it fascinating, and it can't help but fail to live up to that. Much of it is not fascinating, just tunnel. Number One Son has always had a low boredom threshold, and he was catatonic by the time we emerged.

And because you're never alone, and to a degree isolated in the passenger module, it's harder (at least it was for me) to really feel the excitement, awe and magic; I felt that much more in the Harecastle Tunnel, where, when steering your own boat and especially if leading, as we were, your relationship with the tunnel is much more direct, and your ability to see it as it was is much greater.

None of this is to say though that the Standedge Tunnel is not worth navigating; it is, it is, it is. The effort that's gone and continues to go into it should be rewarded with use and appreciation. If it's not used, the temptation will surely be, come the next round of budget cuts, to abandon it again. It is interesting, notwithstanding everything I said before. I would do it again, given the chance. And it is, of course, an integral part of navigating the Huddersfield Narrow Canal, which is most definitely, in my humble opinion, worth doing.
Posted by S at 11:34 AM