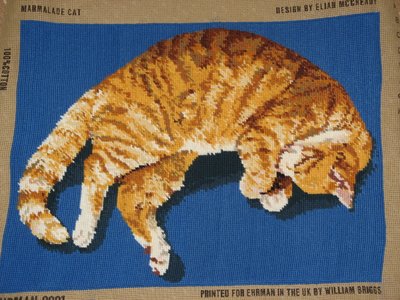 In 1988, when Number One Son was two and a half and Lockboy was nearly two years off being born, we bought a little ginger kitten, and called him William. Other cats, and other pets (hamsters, rabbits, rats, guinea pigs, fish and, briefly, snails) came and went, but William stuck with us - and me in particular - through all the ups and downs of contemporary family life. When I saw this tapestry design that looked exactly like him, I had to buy it. This would have been in late 2002/early 2003. Knowing there wasn't room on my lap, William - now an old cat - would lay beside me, stretched out against my leg, as I stitched. In the heatwave of June 2003, William suddenly started going downhill fast, and died, essentially of old age, within a couple of weeks. This was particularly hard on Lockboy, who had never known life without this amiable, lazy cat.

This was at the time when we were first seriously thinking about buying a narrowboat, and we declared that our boat, when we got it, would be named 'Sweet William' in his memory. I had some reservations about changing a boat's name, but if we had bought one called, say, Foxy Lady, I would not have hesitated. Warrior however is a different matter. We have met the builder, who built it for himself, and named it after HMS Warrior. His current boat is named after her sister ship HMS Revenge. What's more, the name really seems to suit the boat. So we won't be changing it after all. But what we will do is have the tapestry - which I finally finished yesterday, after about four years - framed, and it will have pride of place in Warrior's saloon.

There is a small postscript to William's story. Shortly after he died, leaving us with just one cat (Emily) the local paper ran a story saying that the local cat rescue centre was having to close for lack of funds, and desperately needed to home all its remaining cats. I rang up and said we could take two, perhaps three ... The woman who ran the centre was overjoyed - she had, she said, three cats - three generations of the same family - who were so devoted to each other that she couldn't bear to part them; could we take them? Of course we said yes. And now have a trio of cats who hate each other and are not conceivably related. And the following week the rescue centre was reprieved by a large donation. We now actually have five cats, having added a stray who has a nice line in killing pigeons. But there will never be another William.
Posted by S at 7:15 PM