Don't I know you from somewhere?

Well I never thought I'd see the day I'd do a lot of things, and going to meet a bunch of people whom I know only from an internet forum is certainly one of them. To be honest, I never thought I'd see the day when I'd be participating in an internet forum. But there you go; get to my age, and suddenly throw caution to the winds.

So Saturday night saw me on an enormous mass blind (or at least partially-sighted) date, courtesy of Moley whose fiftieth birthday we were celebrating, with some forty-odd (or, indeed, forty odd) members of the Canalworld forum. I had approached the event with some trepidation, but have to say it was the party of a lifetime (as Moley later noted, I don't get out much, but I think that would still be the case even if I did). I have learnt, over the years, that I don't really like parties. Having graduated from sitting in the corner looking desperate, I now tend to sit in the corner looking aloof. Of all the people there, I had met only three before in the flesh (Moley himself, as he sailed past Stretton one day last spring when we were on the towpath painting. I registered the name of his boat and without thinking shouted 'Moley????', and he tied up and came down to say hello; and Chris and Lise from Baldock, met very briefly at St Ives last year).

All the others, although I didn't know them, I sort of did. I wasn't even surprised (much) by how they looked. Bones rather taller than I'd imagined, perhaps. The food - this was at the Boat Inn at Stoke Bruerne (of which more anon) - was excellent. I suggested to Jim that we sit separately so as to meet more people, so I plonked myself down at an empty table - and found myself sitting between the legendary Carlt whose knowledge renders me speechless, and the preternaturally charming Eugene Baston, opposite lovely Purple Fairy and Smudge. For entertainment there was a man in a codpiece with a hurdy gurdy... who could possibly ask for more. 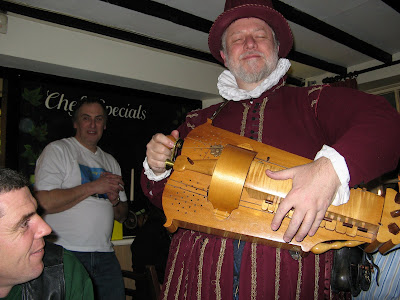