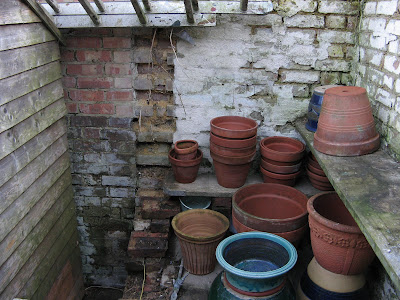 The first real hint of spring is in the air at last. I know it doesn't do to complain, when the winter has been so mild (and there's still probably some to come) but I do love to see a bit of sunshine. It's generally accepted that the darkness of winter can be depressing, but to me it's as much the cold, that keeps you huddled and shrivelled and indoors, that's oppressive. So as soon as a shaft of sunshine cuts into the corner of my little garden (which gets hardly any sun in the winter, being surrounded by buildings), I'm out there standing in it, leaning over the fishpond, trying to sense the first touch of warmth. In the summer, you will never catch me complaining that it's too hot. Firstly, England really doesn't do hot, and it's a bit of an insult to people where it's really hot for us to complain about temperatures in the mid 20s c. Secondly, I reserve absolutely my right to complain about the cold, to huddle and shiver, and go round banging windows shut and lighting fires, and it seems a bit greedy to try and have it both ways.

What a lovely weekend this would have been to go boating, in the fresh, bright, newly warm air. Instead, I have been, to put it vary loosely, gardening. Or rather, working in the garden. Well, really, the back yard behind the garden wall, in the dampest corner where the sun never shines and all the old pots of plants are left to die, a place of drowned snails and green slime, sodden bricks and the sinister vestiges of the outside toilet that presumably used to serve both our house and next door. So I moved the piles of bricks, swept up the never-ending crumblings of render and flakes of old distemper and generally Let The Air Get To It (a pretty much universal panacea, in my experience. Except for fish. Oh, and I suppose old wooden boats); I emptied and scrubbed the rather impressive collection of plant pots built up over the years, and replaced them in rather winsome fashion. I can now go and hang out the washing without losing the will to live. What's more, it might even dry.