When we visited Warrior the other week we discovered a second thing that needed repairing following our grand tour. In order to paint the back cabin ceiling (the dark graining being such a hit that we decided to redo the lot), Jim disconnected the gear linkage. At which point he discovered that where the vertical lever connects to the gearbox itself, the rod was actually broken, and had just been sitting in the casting. To be honest, we have no idea how long it had been broken, but it might account for why we felt there was a bit of play in it, and I wasn't always definitely sure whether or not it was in gear (e.g. reverse when trying to stop).

There is a cast connection on the gearbox which is a cup, into which the vertical rod fits. This in turn is linked to the horizontal rod that runs along the cabin ceiling and terminates in the handle which we push and pull. The vertical rod is made of brass, and is threaded at its lower end; it screwed into the casting. It's broken at the top the thread. 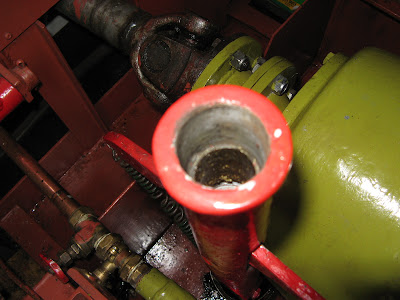 The threaded part is pretty near impossible to remove, so the most likely solution will be to splint it with a smaller rod on the inside. Hopefully this will make the gear change more positive and definite.
Posted by S at 8:07 PM