Then two come along at once... 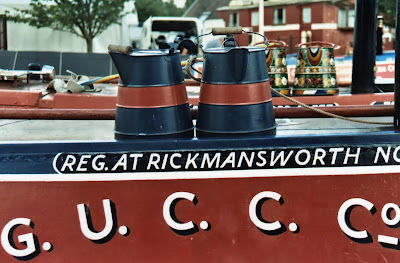 I went to a reception last night. It was for the relaunch of the Raphael Samuel History Centre. I'm not a historian, and I'm not really sure why I went, except that I thought there might be decent grub (there wasn't, although the wine was about two grades above the usual paintstripper).

But as the various speakers introduced the centre and what it does, and the archive and what it covers - among other things, East End history - light bulbs started to come on in my head. My first thought was, maybe they have some canal-related stuff. My second, when they started talking about their work with 10-14 year-olds, trying to get them interested in history, was could this be my first marketing success for the Camden Canals and Narrowboat Association. After the speeches I made a beeline for the education person and pitched her the idea of taking their schoolkids on a historic boat through historic east London. My geography, hazy at the best of times, was already sufferering the effects of the wine, but I managed to throw in casual mentions of Hackney and Limehouse and she seemed to think it was a great idea.

Then I was looking at the display boards about the historian's life and another woman engaged me in conversation about who I was and why I was there, so I mentioned my interest in that side of things, and she said, oh, you must meet my mother, her partner has a share in an ex-working boat. It turned out that her mother was there too! So I had a lovely chat with her (as far as it was possible to chat given the dreadful acoustic in the room; I was quite hoarse by the end). The boat in question was Fulbourne, which has long been a favourite of mine; I like its unshininess. Anna seemed quite keen for me to come along as a bit of female company next time she was out with the boat, which is a rather exciting prospect, if it comes off.
Posted by S at 7:54 PM