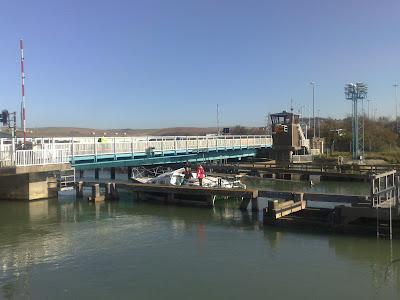 I noticed yesterday that the tide was particularly high as I walked to the station, but it was still a surprise to see this this morning. I suppose it's quite unusual for a boat like this to want to come so far up the river as most would be based in the marina further down, but there are boatyards and moorings all around Denton Island, so I guess that was where they were heading. They seemed a little put out at not being able to get under the bridge, pacing the deck and talking into a mobile. Normally, I'd imagine, they would have got under without any problem. This was at 10 o'clock, and the bridge was due to open at 10.30, presumably for a ship to come in as I couldn't see one waiting to go out. Perhaps they sneaked through then.
Posted by S at 9:41 PM