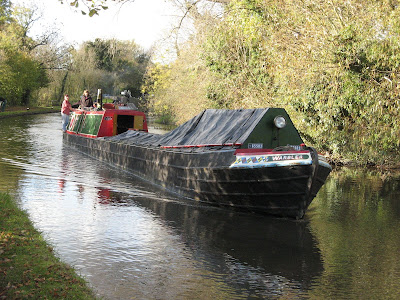 Canal transport was a long time a-dying. It might be possible to date the start of its decline to the hubristic expansion of the Grand Union fleet in the 1930s - itself a response to a changing landscape. By the time the war was over, and the major fleets had been nationalised (compulsorily in the case of G.U.; voluntarily for others like FMC) it was clear which way the wind was blowing.

By the sixties there were no more big fleets, just some hardy individuals and a few small companies operating on what we would now call a new business model, picking up mainly short term contracts wherever they could. One of, if not the, last of these contracts was for the delivery of coal from Atherstone to a jam factory at Bull's Bridge - the famous Jam 'Ole. The ending of this contract in 1970 is generally taken to mark the very end of commercial canal carrying in Britain, certainly by narrow boat.

And sometimes, some people with old boats like to get together and re-enact this last journey, trying to preserve the techniques that would have been used for the efficient, and above all, quick, passage of locks and the handling of pairs of boats. Sometimes in the past they have annoyed people, for example, by not slowing down for moored boats, shock horror. This I wanted to see.

But then last year the organiser announced that he wasn't going to organise it any more. One of the reasons was that the former boatmen and women who had previously participated were becoming too old. I was very sad to hear this. And then earlier this year I read in the Historic Narrowboat Owners Club newsletter that someone else had taken on the mantle of organising the event, and that it would take place this year.

And so it came to be. In fact, this year's Jam 'Ole Run has been very small and low key, with only about eight boats taking part and, sadly for me, no pairs. However, Tom (for that is his name) is hoping to have a much bigger one in 2010, for the 40th anniversary.

Undaunted, we set off yesterday to try to catch up with the boats in a convenient spot and watch and drool from the towpath. It was of course quite hard to get up to date information about how far they had got, but we were confident of catching them if we got to Berkhamsted at lunchtime. This we duly did, and began to walk up the towpath. After three quarters of an hour, almost magically, a lock gate opened in front of us and we saw this: 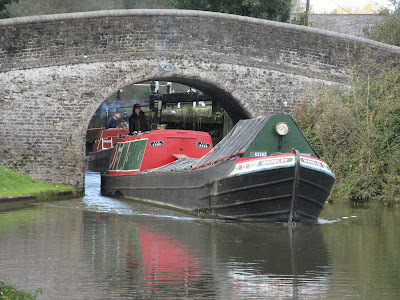 Warbler and Stanton. It turned out that we had in fact missed all the other boats, and these two were behind having been delayed by engine problems. But what a stroke of luck for us! Ros and Phil and Laura and Peter accepted offers of assistance from two total strangers, lent us their windlasses and let us ride on their boats all afternoon. Ros even let me steer Warbler for a bit and I think Jim got a go on Stanton. The weather (unlike the previous day) was perfect. The only other boats we saw moving, both coming the other way, were also old boats, which made it almost perfect: Bletchley and Argus, the coal boats; and Hesperus towing Bude.

We jumped ship at Apsley at six o'clock, because I had to be back in London. Ros and co thanked us for our assistance, but I have to say that the pleasure was entirely ours.

There are some more photos here.
Posted by S at 1:02 PM

The butty paired with Bletchley is Argus.

They were up at Cow Roast today, thereby saving me a few bob on their coal, versus the Marina price.

Not only does Peter work the pair single handed. he told me he was on his way to Wolverhampton to load.
I was gob-smacked, but as one of the bags he sold me is clearly labelled "Wolverhampton", I don't think he was winding me up.

Not sure I'd be too keen meeting a loaded pair in one of the major tunnels, if I knew the butty was steering itself!

Of course! Thanks Alan. I think I'll amend the original post, then these comments will confuse everyone.