The ruin of many a poor boy

This, apparently, is where it all began, even before I was born; the slow but inexorable process that turned me from a mild mannered mum whose idea of exercise was turning the pages of a book, into the windlass wielding, rivet-counting boat groupie you see before you today. 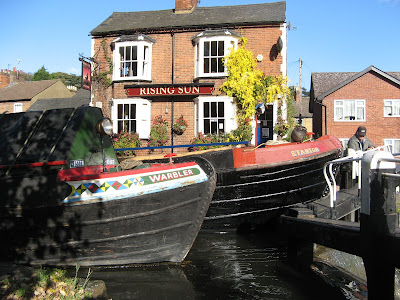 It's 1960. A ruddy looking but inwardly nervous fourteen year old boy has, because of his father's job, just moved house for the third time in as many years. This time he's many miles away from the corner of Sussex where he grew up, and far from his friends and his newly-married older sister. He has just started his third year at secondary school, in his third new school in as many years: a new-fangled comprehensive, the biggest school in the country. Coming from a small old fashioned grammar school (although he didn't like that either), that's a bit of a shock to the system.

Missing the open Sussex countryside where he grew up, he gravitates towards the canal. He's never seen one before, but he's immediately fascinated. He sits on the bench outside the pub, every day after school, and watches the boats go by. Does he ever speak to them? He can't remember, but he was probably too shy. This is his abiding memory of his time in Berkhamsted; he can't remember where it was he lived, but he can remember watching the boats from the bench outside the Rising Sun.

Then after a year, it's time to move again, back to Sussex. He's pleased to go, but there's one thing he will miss. Maybe he doesn't realise at the time quite how much those boats will haunt him. He might not think about them for years on end, but some time, maybe forty years later, he will not only remember, but he'll do something about realising this dream he's always harboured, to own a boat like that.