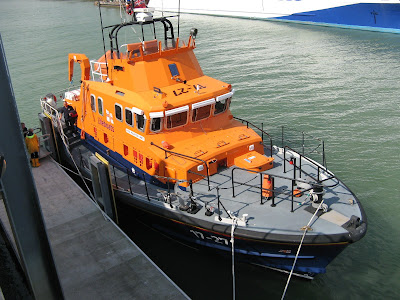 Ah, once again it's the time of year for the Newhaven Fish Festival. This event appears to go from strength to strength, being, in this, its third year, now provisioned with the dodgy funfair without which no festival is apparently complete.

Sadly, I was far to busy arguing on Canalworld to go and look at the fish this morning (still, when you've seen one...) but when Jim came back he suggested we take a stroll down the quay to take advantage of the lifeboat open day.

Jim has recently got involved with the lifeboat; not going off rescuing people, nor raising money, but participating in a scheme they run in which they check people's safety equipment. So he now feels quite proprietorial about the lifeboat.

The one based at Newhaven covers quite a stretch of coast apparently. Rather disappointingly, though, the vessel we went to see today is not the regular Newhaven one, but a stand in. It was pretty brand spanking new though, and even though we arrived just after closing time, we got to have a look over it.
Posted by S at 4:35 PM

Alas I am far too old to be a crew member and even safety advisors have to retire at 70 :),also I am not too sure that I could be 'non-judgemental' enough to be bothered to rescue the half wits on jet skis.
M

It is not just safety equipment but covers all systems and equipment on board with an emphasis on sea safety. I would encourage anyone with a lumpy water boat to contact your local lifeboat station or RNLI at Poole and arrange a check it takes about 2 hours and is free and most importantly is tailored to your boat and your use of it. M

Oi, what's this, using my blog for blatant advertising!