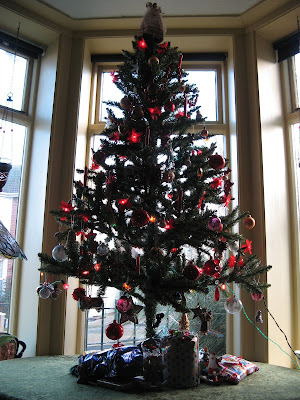 Every year since 1993, I have assiduously erected a real, live (well, dying) Christmas tree. When the children were small, collecting the tree was a ritual. We went to Harvest Forestry, in Brighton, where every year they created a sparkling, pine scented magical winter wonderland. We would select a tree - as big as we could fit into our high-ceilinged front room - and choose one or two special new decorations to be souvenirs of that particular year. It was always a traditional fir tree - the one with the needles that lacerate you before falling off.

We'd lash it to the roofrack, and bring it home. where of course it was dark and wet and cold as we sawed off the end and wrestled it into the Christmas tree holder. Then came the moment we'd unleash it from its netting (or, in the early days, string) and the ends of the branches would poke us in the eye.

Then the fun of decorating it would begin. First of all, draping an eight foot high porcupine with festive lights (tasteful white ones, natch), then fighting over whose turn it was to put the fairy on, and who got the consolation prize of the pixie (both c. 1963 vintage). All while listening to the CD of carols from St Pauls on constant repeat. Every year, I confess, I found it all rather stressful. In later years, Harvest Forestry's Christmas shop was no more, and we were reduced to buying a tree from B&Q. And by the time we wanted to get one, all the decent ones were gone, and there were a couple of years that involved driving around Sussex in ever-increasing circles in search of a last minute tree.

Then - I forget quite when or how - on impulse, in the post-Xmas sales, I bought a heavily reduced, executive quality, artificial tree. Of course, the children (then about 22 and 18) wouldn't hear of using it, as it is a well known fact that any deviation from fifteen year old ancient family tradition at Christmas will bring about the apocalypse. So it was banished to the forge and forgotten about.

Until my sister visited last week, and I tripped over it while looking for the Christmas cards. After the first evening of family tree fun, we were somewhat at a loss to entertain her, so I suggested that just for fun, we get this tree out and set it up. Neither of the boys was around to stop us, so that's what we did. We got the tree out, put it together, bent its branches into a highly convincing semblance of a spruce, and mounted it on the table in the window. We then decked it in tasteless red poinsettia lights and, when these didn't quite reach the bottom, added the set of coloured lights we remembered from our childhood (complete with Granada plug that must have been filched at some point from the rented TV). For once we didn't argue about the fairy (though Ali did ask, rather suspiciously, 'Is that her original skirt?').

And so by the time Baz got home, the tree was twinkling splendidly (if redly) through the window, and if he felt the chill of the passing of an era he didn't say so, and there the tree still sits, now with a few presents underneath it, and there, I think, it will stay. And there I think it will be next year too, and the year after, and the year after that. Because no one got frozen, or scratched, or had their eye poked out; no one had to drive from DIY superstore, to farm shop, to pub car park; and above all, come Twelth Night, we will not be drowning in a sea of needles that I will still be finding down the back of the sofa in July.

Faux fir, maybe, but are those real candles I see? You must have some amazing candle holders (and super-strength branches)!

Oh, and I still haven't found your new blog. Give us a clue!

They are super candle holders. German - they're very big there, and they do light them. The branches of the fake tree are much stronger than on the real one - amazed to find I could put heavy decorations on the lower branches. Probably safer to light the candles on this tree than on the rather more flammable real one, but I don't want to melt it so we won't try. We had a half German friend who used to light hers. Their house did burn down, but it wasn't because of that. (Wasps nest falling into back of halogen spotlight)

Tut, tut fake fir -- the washer josher of Christmas trees!
Have a happy xmas all the same.

Hi Sarah
firstly, sorry we did not get chance to chat more at the BCLM earlier this year but as you could see we were busy with visitors. Next time well have a cuppa and a good chin wag. Fake fir trees burn vivid memories with me. When I was very young during school holidays, my elder sister was looking after me while parents both at work, she went up to our local shop leaving me 'home alone' for 5 minutes during which time I decided to lite the candles on our tree. These set fire to the 'brush' branches of the tree which set fire to the 'paper' decorations on our lounge ceiling. I ran into the kitchen, filled the hand bowl with water and threw it over the tree, extinguishing it, then ran off up the street to get my sister. Boy was I in trouble when my dad came home (mom always used to say "wait till your dad gets here)If I remember right my sister got in even bigger trouble.
Can't wait for the nbchertsey.blog to see what you are up to.
All the best and a merry xmas
Blossom

Kevin, you are so right. But at least I know it's inferior.

2nd Son was most upset at the passing of tradition actually. Although he does acknowledge the ease of the new tree, albeit sadly.

The fairy doesn't like the artificial one much either. Says it gives her a rash...