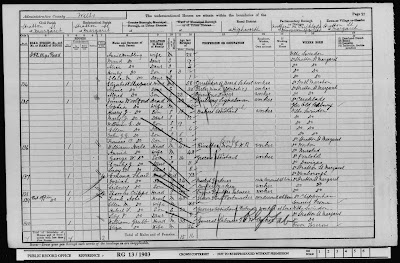 My sister has just been visiting, and she has spent the past few months working on our family tree. She brought it printed out on lots of A4 sheets and laid it out on the living room floor, and sellotaped it all together.... Then she packed it up and took it home with her again. Ah well.

After a couple of bottles of wine she also found me some census returns, including this one from 1901. Click on it to get the bigger version, then about half way down the page, at no. 136, William Hale - that's my great grandfather - a 'rivetter (iron) GWR', with 'boiler' added in pencil. I was very chuffed to discover this. Prior to this generation, the Hales had all been agricultural workers in the Devizes area. The story Ali has uncovered is that William's older brother initially walked twenty two miles to Swindon and got a job on the railway; William later followed him. Next but one down on the list is George William, my grandfather, who I had always understood to be the boilermaker. On this census he is working as a grocer's assistant, but he is only fourteen! On the 1911 census he is down as a 'plate worker' at the GWR wagon works, but Ali swears that she has seen him described as a boilermaker somewhere.

Anyway, great grandfather William the rivetter will do me for now.
Posted by S at 6:53 PM