Look what I got! 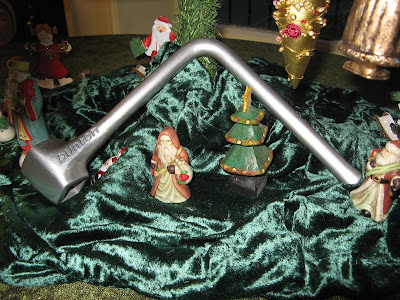 I got lots of lovely things, but this is the one I want to go out and play with straight away. What do you mean, I can't?

Courtesy of No.2 Son, my very own Dunton Double windlass. I've wanted one ever since I borrowed Jane's last year; it was just such a pleasure to use. I know - at least, I've heard - that it might not be suitable to use everywhere, but it's just such a lovely thing I'd be glad to have it even if I only used it on the Regents Canal (I don't think there's many places it doesn't fit really though).

I also got (thanks to Jim) two books (one on the Regents Canal, published in 1961, and the BCN Society's 1973 BCN in Pictures), as well as three DVDs and a video. And from my cousin, among other things, a waterways calendar featuring the most uninspiring selection of boat and waterways photos imaginable.
Posted by S at 3:59 PM

We have two, a standard and a long throw and as you said they fit most locks that we have been through.

Richard bought me one for my birthday a while back, he got himself one while he was at it! They seem to fit most locks - can't think of any that it doesn't offhand, except maybe the river Wey but they have their own anyway......

A lockie somewhere told Richard that you're 'not a boater 'til you've got a Dunton' so welcome to the club :-)

ps. Santa got me a hand-warming sleeve for the tiller; boating gadgets - you can't beat them!