It'll be a pipe next. 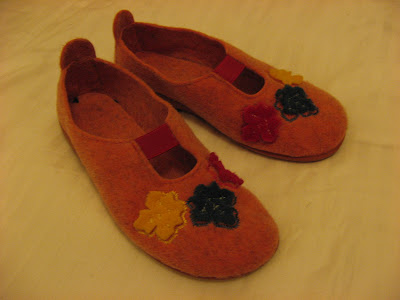 I'm not much of a one for slippers. We used to have them as children, for wearing with our nighties. Pirelli ones, that smelt of rubber, with fur round the top. After a few weeks the soles would start to wear away, revaling their cardboard innards and creating flapping bits at the front to trip you up. Occasionally you'd forget you were wearing them and get in the bath with them on, which while amusing (at least the first time) was also unpleasant in a squelchy sort of way, and very unnerving, being a rather surreal juxtaposition of sensations.

So slippers haven't featured greatly in my adult life. Much to Jim's chagrin, I am one of those people (and I believe this is an issue on which the population can be neatly divided in two) who do not believe in taking my boots off before entering the house. I don't like doing it in other people's houses either, but I will make an exception if a. I really like them and b. they have really nice carpet. I wouldn't ask anyone to do it though; by asking people to remove their footwear you're making them vulnerable; asking them to put themselves at a disadvantage. Basically, they can't run away.

But now I am no longer the creature of habit who gets up at six, showers, and gets dressed before facing the day; now I occasionally like to have a bath in the evening, or a cup of tea before I get dressed, and the kitchen floor really is quite cold underfoot, I wondered whether some slippers might be for me after all. (No! Please don't say it's my age and that I'll be smoking a pipe next...)

And then, whilst Christmas shopping this afternoon, I saw these and was smitten. And my feet are tucked up cosily inside them as I write this.
Posted by S at 6:19 PM

I must say that they are very you...

the man of many odours!