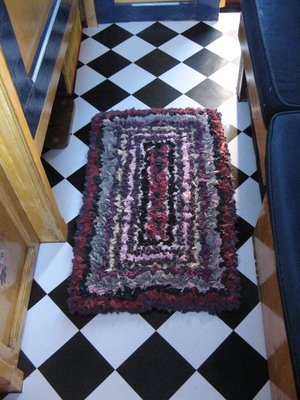 Back to the saga of the cabin floor. The story so far: the floor had vinyl stuck to it, with a layer of wood-effect plastic tiles on top. I wanted either black and white checked vinyl (to imitate traditional lino) or plain red oxide or floor paint. This latter, apparently simplest, option was ruled out by the type of boarding used for Warrior's floors throughout: not ply, but that rather bitty composite stuff. I wasn't mad about using vinyl, partly because of its environmental impact and also because to be able to get the checks to run on the diagonal we'd need to buy about three times as much as we would actually use, as none of the patterns we could find (and we really did look) were printed diagonally. We had a piece of real lino (not checked, but a nicely old fashioned marbled pattern) that would have been good, but it turned out to be too small.

But, you will see from the photo, I have achieved the desired effect - and at minimal cost, so if it proves not to be durable not too much has been lost (about twelve quid and a day's effort). I stumbled upon the answer by chance in Homebase - they are tiles, a foot square (i.e. four squares each), thin plastic with a self-adhesive backing, at £2.49 for a pack of six (I think). The main reason I have doubts about their durability is the state of the floor they were layed on. I had hoped to remove only the top layer of wood effect tiles and lay the new ones on top of the old vinyl, but the two previous layers refused to part company with each other, and the whole lot had to be unstuck from the board, bringing bits of the board with it and leaving a not terribly flat surface. But I pressed ahead - perhaps foolhardily - because I wanted to get it done and see what it looked like. The adhesive seems to be very effective and the tiles have butted up to each other well, so I'll be keeping my fingers crossed.
Posted by S at 9:07 PM