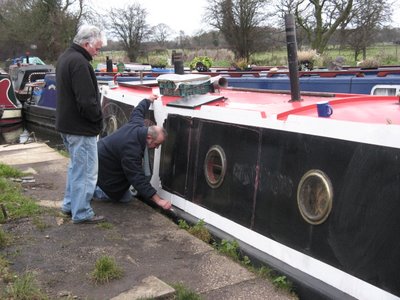 Just spent a very productive weekend up on Warrior. The first thing we did was meet signwriter Dave Moore, with a view to his signwriting Warrior next year. It won't be until late spring/early summer, but I thought we'd better plan ahead as we don't want to be held up at the final stage. We liked the cut of his jib - very conservative and traditional - and he's happy to do it, so if all goes to plan that will be the icing on the cake.

Jim and I have been debating the design, layout, lettering, colour scheme and content ever since we got the boat - probably earlier! The main points of contention were whether it should be ornate or austere; whether we should have our names on it; whether the boat's name should go in a panel, or tug-style along the side (or even, and I have been soundly put in my place over this, on the fore-end). Guided by Dave's advice we have settled (famous last words) on, respectively, relatively ornate within panels on the back cabin and engine room, with the rest of the cabinsides totally plain; no coach lining, nothing (except a red handrail); yes, we will have our names on it as if we were really in the tug business; boat name to go in a panel. We haven't talked about colours or lettering styles yet, although the panels will probably be black or very dark blue, on the Fergusson grey ground.

Very early days yet, but it was exciting to watch Dave roughly chalking out the layout to see how it would fit around Warrior's hatches etc. and to start thinking about the possibility that it will, one day, be finished ...
Posted by S at 8:44 PM

Will be interesting to see the results. I went for austere with my (horrrors) stick on name.

The trad lettering looks good, but as mine is a pretty brutal looking tug, I didn't want to get too carried away. I like the different approaches everyone takes with their boat, especially boats like yours. :)

I watched a guy hand signwrite a boat down here and it was fascinating to see a skilled craftsman at work.

Dave`s a good mate of mine and will do a lovely job- but should anyone want a slightly hairier signwriter of an equally traditional bent - I travel too!
Phil