I suspect many bloggers are journalists or columnists manques; I certainly am, so in best newspaper tradition, here is my review of 2006 and the (mainly) boat-related highlights of my year. It is also nbWarrior's 100th post! Hooray!

January and February
Seems so long ago! Huddersfield. Cold. Dark. Andante's trusty Paloma succumbs to the cold and develops a water leak, so no hot running water. Morning routine: 6.00 listen to the news. Put on socks (which have been tucked up next to hot water bottle all night), warm trousers and fleece, over pyjamas. Then, and only then, get out of bed. Make sandwiches. Collect bag containing civilised clothes. Put on coat, hat and boots. Five minute walk along the towpath and across the canal to university building containing shower, kept spotless by marvellous woman called Irene, always immaculately dressed, coiffed and made up at 6.30 in the morning. Transform self from grubby crusty into respectable academic. Further five minute walk to my office in glorious Victorian gothic former technical college, as the sun comes up over its turrets. Have two cups of tea and a bowl of muesli. Start work.

March
Start thinking about moving Warrior to somewhere where the engine can be taken out. I send off my 127th job application. The previous 126 have yielded 16 interviews and two fixed term contracts, which is not a bad rate of return for academia.

Andante gets broken into (not good) although as I am not there at the time, there's nothing on board to steal, and little gratuitous damage, it could be worse. Straight after repairing her window, we're on our way to Hargrave to bring Warrior down to Stretton. This is where it starts to get exciting. With little experience of canal work, no reverse gear, and a dodgy governor, we blunder our way down the Shroppie, leaving miraculously little carnage in our wake. Later, we drive up to Ellesmere Port to see the working boats we ploughed through on the way down. 127th job application yields 17th interview.

May
I somehow seem to stop blogging.

Warrior is out of the water, engineless, and with hull shotblasted. A big highlight I missed was the engine coming out. Nothing will keep me from seeing it go back in.

Worst eating out experience of the year: The Vaughan Arms at Lapley. Enormous pub, Saturday night; empty but for one rather odd family, who didn't stay long anyway. Quietly sinister barman; hopeless if endearing waitress (let's just say we weren't surprised when she told us it was her first day); football on the telly nicely complemented by the 80s pop blasting out of the speakers; lasagne with bits of packaging still in it, and a very old cat who, although commendably friendly, was rather too smelly to make good mealtime company.

Go to Crick, which is OK, then on to Barry Hawkins' open day, which is one of the true highlights of the year. Ian is there, and we meet the Redshaws, who are wonderful, and drink cans of Strongbow and eat all the veggie cheeseburgers. And Jim befriends a (quite possibly the) floating blacksmith, whose description of his response to customer criticism of his work - 'so I chucked it in the cut' - in the most glorious Black Country accent, should be recorded for posterity.

Seventeenth interview results in offer of permanant, London-based, job. To celebrate, Baz and I watch Curse of the Were-Rabbit on DVD.

June
I start blogging again, and this time I keep it up (so far).

Get get back from Huddersfield one Friday, ready to start a week's leave, to learn that Jim has located a source of wood for Warrior's floor. In Leeds. So off we go; load the car up to the roof with our floorboards newly sawn from 200 year-old beams, and take the scenic route down to Stretton through the Pennines and the Peak District. It is very hot, the car barely has any brakes, and for some reason I have volunteered to drive.* It's fantastic.

Also, of course, Braunston, where my previous interest in working boats threatens to become an obsession. 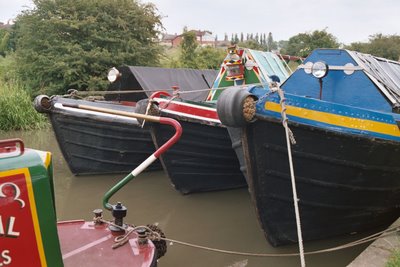 *This is unusual, as I have garnered a reputation for myself as a Very Good Passenger, which means that I don't shreik too much. Jim on the other hand, although undeniably a good driver, is the World's Worst Passenger, and many's the journey that's ended with me swearing that I will NEVER drive him ANYWHERE, EVER again. This has happened many times on boats, too.

July
Blacking Warrior in the baking heat. The smell of Comastic. The mindlessness of Radio One (Monster, by The Automatic, according to my Young People's Music Advisor). The most abiding memories of last summer.

August
Moving Andante from Huddersfield down to Stretton means loads of excitement and new experiences. What stands out? The people we met, especially the ones we drank with: Clive and Christine in Kidsgrove and Tony and Sheila in Stone. The sun coming out as we crossed Tixall Wide. Number One Son Aaron coming boating for the first time and really taking to it. Harecastle Tunnel, which I found a lot more interesting than Standedge, to be honest. The rain. Visiting the National Engine Works. Finally getting some practice at steering (see above).

And being shown how to tie a boatman's hitch.

September
Starting new job. Nosing about bits of the Regents Canal for the first time.

Weirdest coincidences of the year - possibly of the decade: the amazing Pendorric saga unfolds. (Hopefully I'll be meeting up with Jacquie tonight to chew over that one).

October
Visiting Hampstead in Battlebridge Basin. Having watched work progress at Stretton over the summer, and having last left as the boat was being painted, but before it was signwritten, I rather cheekily invited myself over when Keith brought Hampstead down to London, to see the (almost) final result. A lovely morning on a beautiful boat, and the first time, I think, that I've set foot on a proper former working boat.
[oh, except for in a museum, she remembers a week later.]

November
Accept an offer on Andante (still too soon to count chickens, so will say no more at this stage).

Start to sort out Warrior's back cabin - now I no longer have a boat of my very own, I guess I'm carving out a bit of territory in the shared one. Make very pleasing rag rug, but efforts at crochet continue to fail dismally.

Funding cuts protest in Little Venice: having been in two minds about going, I was really glad I did. Met some more lovely and interesting people, and got signed up to the Historic Narrow Boat Owners' Club. More grist to the mill! 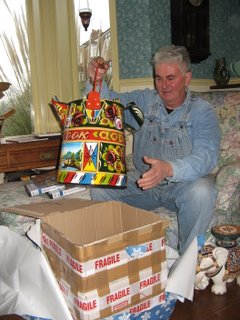 Finally taking delivery of Phil Speight can and handbowl ordered for Jim's Xmas present. Gorgeous. Handing them over on Christmas morning.

So, what does 2007 hold?
Well, hopefully:
The engine will be finished and reinstalled
Warrior will be painted and signwritten
We will go to the RN rally at Atherstone in June, and the IWA in St Ives in August ...

And as for me personally ... I will hopefully:
Learn to splice
Finally get to grips with crocheting
Become an all round better boatperson

Interesting year, how are you finding working in London? I'm interested in the working boat rally thing, is there one every year?

Love working in London - best of both worlds, as I'd hate to be bringing up kids here, especially the stress of getting them into schools. Braunston is every year, June 23rd and 24th this year, already in my diary. And the gathering at Ellesmere Port I think is, Easter Bank Holiday. There are other events too but these are the ones I went to last year and both were great. Braunston's nearer, bigger, better, cheaper (£10 per car last year, no entry charge on top)in my somewhat limited experience. Do go! See you there, perhaps.